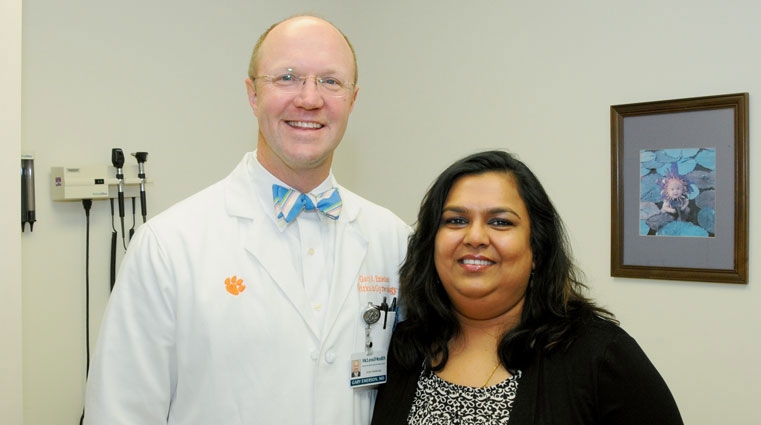 Imagine living with the constant worry of whether you might experience the loss of bladder control – the fear of an accident happening, or the embarrassment when it does.

Unfortunately, this is a real concern that millions of women face on a daily basis, often resulting in a diminished quality of life.

Yet most women suffer these symptoms in silence, believing the idea that “this is a normal part of aging.”

In fact, studies reveal that only ten percent of women with a bladder control problem seek help, and most wait an average of more than six years before doing so.

Poonkulali Suresh knew this statistic all too well. A 47-year-old mother of two, Poonkulali began experiencing bladder control problems about ten years after the birth of her second child.

“The leakage was minimal at first, occurring only when I laughed or coughed,” she said. “However, the symptoms gradually worsened to the point that I was leaking constantly, and it began to affect every part of my life, even my sleep. That was the moment I reached out to my doctor.”

In 2007, Poonkulali discussed her symptoms with her gynecologist and was referred to a urologist, where she was diagnosed with stress urinary incontinence (SUI), or involuntary urine leakage during physical movement, such as coughing or sneezing.

The urologist recommended surgery as her best option; however she was reluctant to the idea of surgery and chose instead to try medication. The medication temporarily helped Poonkulali’s symptoms, but it wasn’t a long-term solution. Then, in 2011, she met Dr. Gary Emerson of McLeod OB/GYN Associates.

“Dr. Emerson was wonderful,” said Poonkulali. “During my first visit with him, Dr. Emerson brought attention to the SUI diagnosis in my medical record and explained more about the condition. Then, he said he could treat it.”

Treatment involved surgery, which still made Poonkulali nervous. However, over the next few years, Dr. Emerson continued to encourage the procedure.

“Poonkulali was the perfect candidate for the suburethral sling procedure,” said Dr. Emerson. “We performed urodynamic testing in our office, which is a simple test that measures how the bladder functions. During the test, Poonkulali experienced urinary leakage, which was a strong indication that surgery was in fact her best option.”

At her appointment earlier this year in January, Poonkulali decided it was time to have the surgery.

“I had complete confidence in Dr. Emerson,” said Poonkulali. “His gentle encouragement and in-depth explanation of what to expect before, during and after the surgery convinced me to go through with it.”

“During the suburethral sling procedure, a tape-like material is placed underneath the urethra, and then each end of the material is anchored to the pubic bone,” explained Dr. Emerson. “This ‘hammock’ effect provides the support necessary to eliminate urinary leakage.”

On February 5, Poonkulali underwent surgery, which proved to be successful.

“For me, the surgery worked fantastic,” she said. “My quality of life is so much higher now. I can jump, cough, laugh, and even sleep without fear or worry.

“Only those who have experienced bladder control problems can understand how enjoyable life is without leakage.”

Since her surgery, Poonkulali has been open about sharing her story with her friends, and to her amazement, discovered that many of them were suffering in silence with similar symptoms.

“Pelvic health is not a topic we may like to talk about, but it’s critical that we do,” she said. “Incontinence should not prevent us from leading active lives. Looking back, my only wish is that I had known Dr. Emerson ten years ago.”

In 2013, McLeod Women’s Services began an effort to raise awareness about women’s pelvic health issues. “Pelvic health” is a new phrase used among professionals in women’s health which refers to conditions such as urinary incontinence, pelvic organ prolapse, endometriosis, and more.

Research indicates that nearly half of all women will experience symptoms related to pelvic health issues at some point in their lifetime, making pelvic health conditions more common than most women realize.

“The ultimate goal of McLeod Pelvic Health is to educate women on these conditions and help them see that they do not have to live with these symptoms forever,” added Dr. Emerson. “We want them to enjoy the quality of life they deserve.”