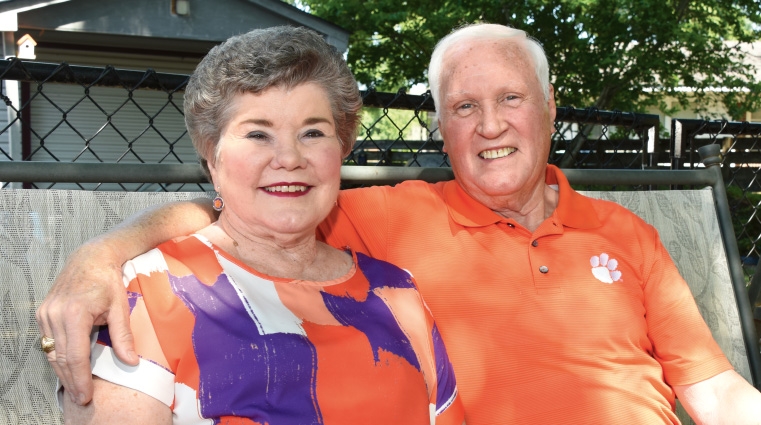 A Journey to Encourage Others

“I will never forget the day in 2016 when the nurse called me and said the doctor needs to speak with you,” said Joe Poston. “Dr. Winston Vaught has been my urologist for several years, and I knew he was not calling to ask me if I was having a good day. His next words knocked me off my feet. He said, ‘The biopsy shows that you have prostate cancer.’”

Joe’s biopsy indicated cancer in only one of the 12 tissue samples, so after a detailed discussion, he and his physician decided to do active surveillance. Since prostate cancer tends to grow slowly in older men it is not unusual to simply monitor the cancer closely with physician visits one or two times a year.

Over the next four years, Joe’s urologist monitored his PSA, a protein produced by both cancerous and non-cancerous tissue in the prostate.

In early 2020, the PSA had increased to a level possibly indicating metastasis, or spreading, of the cancer. A biopsy detected cancer in four tissue samples, confirming the need for treatment.

“I did a great deal of research and decided to pursue radiation treatment rather than surgery,” said Joe. “When I met with Dr. Virginia Clyburn-Ipock at McLeod Radiation Oncology, she was very thorough in explaining the treatment, side effects and long-term results.

“I had prepared several questions, and she took time to discuss each concern in detail. I left her office that day realizing that my life would never be the same.”

Joe says he cannot explain the range of emotions you experience during a battle with cancer. “Each day has to be approached as if you are getting ready to ride a roller coaster at an amusement park. Mentally you have to prepare yourself for the ups and downs that will occur.

“I remember arriving for my first appointment with Dr. Clyburn-Ipock.
I looked up at the building as I approached it, and the words McLeod Cancer Center tore at my heart. However, the moment I walked into the Cancer Center, I felt more at ease. Everyone I encountered from the Security Officer at the entrance to the staff at Dr. Clyburn-Ipock’s office was kind, caring and professional.”

Joe began his 39 radiation treatments on June 15, 2020 during the height of the COVID-19 pandemic.

During his treatment, Joe said he never felt like a cancer patient. “Either Dr. Clyburn-Ipock or Dr. Larry Grubb met with me weekly, taking time to address my concerns and update me on how they felt I was responding to treatment.

They both made me feel as if I was the most important patient they had each time I saw them. That fact alone made my journey less stressful.”

Joe was also touched by a few of the Radiation Oncology staff members. “Amanda, the receptionist, was always kind and like a ray of sunshine when I called from the parking deck to tell her I had arrived. And, Morgan and Amy were the two radiation therapists who positioned me for treatment each day. I cannot say enough about these amazing women. However, I want to add that every employee I encountered at the Cancer Center should be commended for the job they do.”

On August 13, Joe rang the bell, signifying the end of his cancer treatment. He celebrated with Morgan and Amy since Joe’s wife Carol was unable to attend due to the COVID-19 no visitor policy in the Cancer Center. “I was quite emotional the day I finished treatment because Carol was not with me, and it was the anniversary of my mother’s passing in 2003. But, it was still a good day.”

Joe explained that his journey was much better because of everyone at the McLeod Cancer Center, but he said he could not have made it without his faith in God.

“Two days before my treatment began, God gave me the words to a poem I wrote. I also had my daughter Sandra’s very dear friend, Kristy, on my mind during this time as she was undergoing her own journey with cancer.

“Even though I pray for Kristy daily, I wanted to send her some words of encouragement. As I sat on my couch during my quiet time that Saturday morning I thought of my journey about to begin. I listened as God told me, ‘You will walk this road, but remember that I am not far behind.’ The words of the poem flowed from my pen, and I thought about Kristy. My journey is small compared to what she has already gone through and still must face. I wanted to let her know that we will never walk alone. Psalm 23 says, ‘Yea, though I walk through the valley of the shadow of death, I will fear no evil for Thou art with me.’”

Joe drew a great deal of strength from the words of his poem throughout his treatment and hopes it can bring peace and encouragement to others as they endure their cancer journey.

Today, Joe is looking forward to celebrating with Carol their 55th wedding anniversary in December. A father of three children and “Pops” to his three grandchildren, Joe’s passions include his family, the Clemson Tigers, making homemade ice cream, reading and tending to his beloved rose bushes.

Joe has 60 rose bushes in his yard that he dearly loves to tend to and many bear the names of famous people like Queen Elizabeth, Barbara Bush, Dolly Parton, George Burns, Princess Diana, Mr. Lincoln and John F. Kennedy. He often begins his day enjoying some quiet, reflective time outside when the morning dew touches his stunning roses, especially when a bloom has just opened.