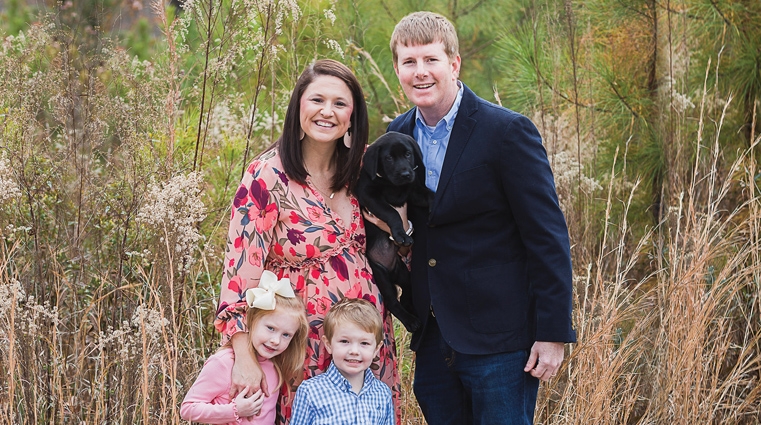 Growing to Meet the Needs of Growing Families

Shelley Jones, a native of Blythewood, South Carolina, and her husband F.B. were ecstatic to learn in 2015 that they would soon become a family of three. Shelley immediately made an appointment with McLeod Women’s Care Clarendon, which led her to Certified Nurse Midwife Tom Chappell, MSN, CNM, FACNM.

Midwives provide care for female patients and their families during adolescence, pregnancy, childbirth and the postpartum period. The Midwives and Physicians of McLeod Women’s Care Clarendon work as an integrated team to care for patients.

“A Certified Nurse Midwife begins as a registered nurse, obtains a bachelor’s degree in nursing (BSN), then completes a graduate program in Midwifery,” explains Tom. “We play a key role with pregnant women, but our function is much larger in scope. In addition to helping mothers manage pregnancies and deliver babies, midwives provide care to women of all ages.”

Excited and nervous about being a first-time mom, Shelley attended birthing classes at McLeod Health Clarendon taught by Adriane Gaff, MBA, RN. At that time, Adriane served as Perinatal Coordinator for the hospital. “She helped calm my fears and lower my anxiety,” recalls Shelley. “The prenatal group classes helped me feel informed and knowledgeable while developing my birth plan.”

“Tom and the staff reassured and comforted me by communicating everything as it happened,” said Shelley.

“Having a baby is one of life’s most cherished experiences, and I am forever grateful for Tom. He was there for us before, during and after the birth of both of my children,” said Shelley. “Carson is now 6 and Wells is now 4, and we are incredibly thankful for God’s most precious blessings.”

Another unique feature of McLeod Women’s Care Clarendon is having a certified Centering Pregnancy® program. The program involves a group of expecting mothers who receive prenatal care together over 10 sessions. The group meets monthly for the first four sessions and then bi-weekly for the last six sessions. Each session lasts about two hours, and the program typically begins between 12 and 16 weeks of pregnancy.

Additionally, Centering has been shown to lower rates of pre-term births and underweight babies as well as increase breastfeeding rates. Outcomes are improved by increasing access to prenatal education and empowering women to take an active role in their care.