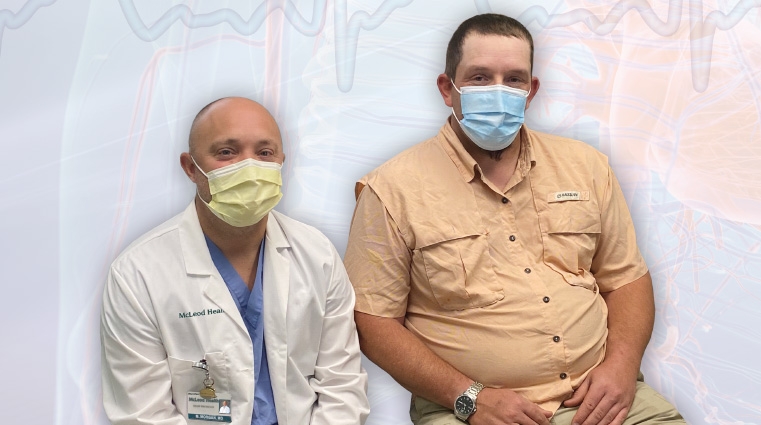 A Change of Heart

Chris McDaniel stays busy driving a semi-truck, often cross-country. When home, he spends as much quality time as possible with his four children and wife, Mary. Little did Chris know that one summer day would change his busy life forever.

In July 2020, 35-year-old Chris suddenly became short of breath, along with chest pain, cough and congestion with a headache.

Because Chris’s symptoms mimicked COVID-19, his wife drove him to a local hospital near their home in North Carolina, where he tested negative. However, the physician discovered that Chris had pneumonia and prescribed him an antibiotic as well as an inhaler to help alleviate Chris’s symptoms.

Two days after leaving the hospital, Chris’s symptoms seemed to worsen. He had to use his inhaler every two hours to breathe.

The next day, Chris and Mary started their day doing yard work.

While Chris was on the lawnmower, Mary noticed his ankles were much larger than normal. She asked him about it, and he told her his ankles had been swelling over the past few days. When Chris’s speech suddenly became slurred, Mary immediately drove him to the McLeod Health Loris Emergency Department.

Upon Chris’s arrival, attending physician Dr. Michael Morgan found Chris’s heart rate to be extremely high and administered a medication to normalize it.

Dr. Morgan and his team performed CPR as well as an emergency cardioversion, shocking his heart back into a normal rhythm. After the medical team stabilized Chris, he was placed on a ventilator.

Chris’s heart was in atrial fibrillation and in cardiogenic shock.

Atrial fibrillation simply means irregular heartbeat. When the heart’s electrical signals do not fire correctly, it can lead to a heartbeat that is too fast. Cardiogenic shock is a serious condition that occurs when the heart cannot pump enough blood and oxygen to the brain, kidneys and other vital organs.

“At this point, numerous medications were supporting Chris’s poorly functioning heart,” said Dr. Morgan. “Chris was critically ill, and I did not know if he would make it through the night.”

Due to his quick decline, Dr. Morgan met with Mary and discussed Chris’s condition.

Dr. Morgan explained that Chris needed to be transferred to McLeod Regional Medical Center in Florence for additional cardiac support.

McLeod HeartReach was then deployed to McLeod Health Loris to transport Chris.

The McLeod HeartReach Mobile Critical Care Unit provides emergency transport services to hospitals and patients throughout the 18 counties served by McLeod Health. It is equipped with cardiac monitors, defibrillators, pacemakers, a ventilator, hi-tech IV pumps, blood pressure equipment and the capabilities for a 12-lead electrocardiogram (EKG). The technology and personnel available in transport is equivalent to the care received in an Intensive Care Unit at a medical center. McLeod HeartReach offered Chris the lifesaving support needed for safe transport.

An echocardiogram revealed Chris had a very weak heart muscle, with only a 10 to 15 percent pumping function.

“Chris had a poor prognosis due to his low-functioning heart,” said Dr. Krainin.

A cardiac catheterization showed that the arteries to his heart were normal. Chris was officially diagnosed with cardiomyopathy, which is a weak heart muscle. Dr. Krainin placed Chris on another medication to maintain and hopefully increase his heart function.

Chris responded well to the medication and continued to improve throughout the week. Dr. Krainin felt Chris could be discharged with certain precautions in place.

Chris was given a LifeVest, which is a wearable cardioverter defibrillator. Since Chris previously went into cardiac arrest, Dr. Krainin was concerned about a reoccurrence. The LifeVest allows a patient to return to most of their normal daily activities with the peace of mind that they will have protection from sudden cardiac death. Chris wore the LifeVest for four months, offering his heart time to heal.

During that time, Chris experienced a strong recovery. His heart pumping function increased to 35 to 40 percent.

“Chris’s story is a testament to the expert coordination of medical teams at each of our McLeod Health hospitals to achieve the best outcome possible for our patients,” said Dr. Morgan.

“I am very thankful for all of the care I received during my time at McLeod Health Loris and McLeod Regional Medical Center,” added Chris.