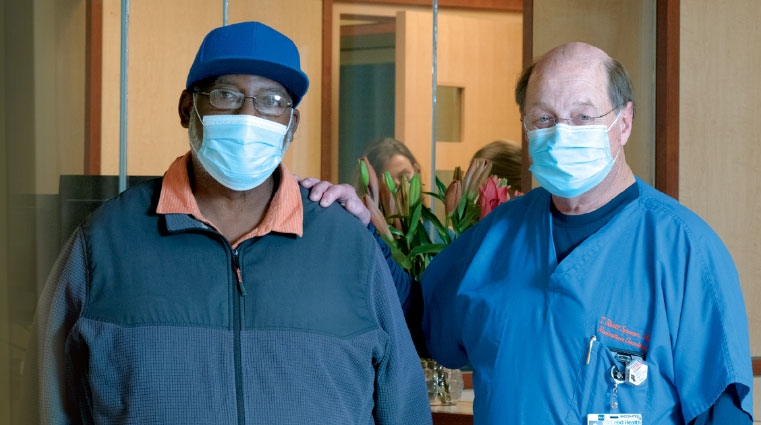 Advancements in prostate cancer treatment offer patients significantly better options. Michael Walters of Fairmont, North Carolina, has benefited from this firsthand. He became a cancer survivor after only 5 treatments, compared to more than 35 treatments with conventional therapies.

Michael was the first patient at the McLeod Center for Cancer Treatment and Research to be treated for prostate cancer with stereotactic body radiation therapy (SBRT) in July 2021.

A former welder by trade, Michael was familiar with the 50-mile trip to Florence, where he worked for 10 years.

“I had to go through with the treatment anyway so driving to Florence every other day for two weeks was better than coming daily for a month or more,” said Michael. “Each treatment session only took 15 minutes, so I was on my way back home in no time.”

Michael’s urologist had been monitoring his PSA level for two and half years, which is not uncommon with prostate cancer.

Since the condition tends to grow slowly in older men, it is often monitored closely with physician visits one or two times a year.

A protein produced by both cancerous and non-cancerous tissue in the prostate, the PSA test measures the amount of prostate-specific antigen in the blood. A normal PSA level for men in their 60’s is zero to 4.5. In 2021, Michael’s PSA level was a 9. A biopsy detected cancer in two spots in his prostate confirming the need for treatment.

Treatment of prostate cancer typically involves surgery or radiation. Michael was informed that his cancer could best be treated with radiation. After meeting with McLeod Radiation Oncologist Dr. T. Rhett Spencer, Michael learned he met the criteria for SBRT and would only need five treatments to eradicate the cancer. “Dr. Spencer spoke with me before and after each treatment. He is a good man and doctor.”

Dr. Spencer has been caring for patients at McLeod for nearly 35 years.

“In conventional radiation treatment, we are able to precisely deliver the dose of radiation directly to the prostate, minimizing harm to the surrounding organs including the bladder, the rectum, the femoral heads and the small bowel. In addition, this therapy has been shown to be beneficial in reducing long-term side effects of prostate cancer.

“However, advancements in technology, treatment planning and imaging has led to new innovations in radiation treatment such as extreme hypofractionated radiation therapy or SBRT for localized prostate cancer which we now offer at the McLeod Center for Cancer Treatment and Research.”

SBRT involves delivering the radiation dose in larger, more powerful portions over fewer treatment visits. It also offers the same survival and risk of toxicity as traditional radiation yet the amount of time a patient needs to undergo treatment is considerably shorter -- from 40 days with conventional treatment to 5 days with SBRT. This allows the patient to retain their quality of life.

SBRT is most suited for men with low to intermediate risk -- meaning the cancer has not spread to the lymph nodes or outside the prostate.

“There is no single treatment option that is better for all men,” added Dr. Spencer. “The most appropriate treatment for prostate cancer should be based on the man’s age, life expectancy, other medical problems, as well as the stage and aggressive nature of the cancer.”