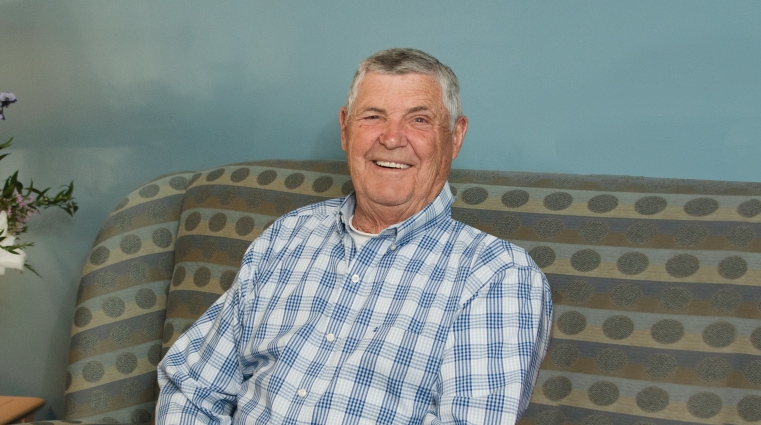 He chose the name “Cooks for Christ” because each benefit is put in the Lord’s hands and Henry gives the Lord all the credit for the ministry’s success.

In November 2021, Henry was working outside when a large pallet fell on his leg. He treated the wound and went back to his work. Over time, however, the wound worsened and Henry knew it needed attention.

Henry decided to go to the Emergency Department at McLeod Health Dillon, where he was treated by Dr. Amid Hamidi.

Henry’s wound had become infected and developed into cellulitis. “Cellulitis is caused when bacteria enters a wound,” explained Dr. Hamidi. “It initially appears as minimally inflamed but can quickly worsen as the infection spreads. Symptoms include redness, swelling, pain, blistering and in some cases, red streaks that radiate outward from the site. Headache, fever, weakness and chills may also be present. Left untreated, cellulitis can spread and cause serious problems. Thankfully, Henry sought medical attention.”

“Dr. Hamidi is one of the finest men I have met,” recalled Henry. “To this day, he remembers me and hugs my neck when I run into him.”

Henry was admitted to the Medical/ Surgical Unit at McLeod Health Dillon to receive antibiotics.

Throughout his stay, Henry received excellent care. “I am still astonished at how well I was cared for at McLeod Health Dillon.”

Henry’s inpatient care team – led by Hospitalists Dr. Benjamin Mitchell and Dr. Nicholas Wallace – made quite an impression. “Everyone was just so caring, friendly and respectful,” he said. “The doctors are so knowledgeable and top-notch.”

Several staff members prayed with Henry during his stay. “Now that was something special,” he said.

One standout caregiver was Bambi Flowers, RN. “Bambi treated me like her own family,” said Henry. “I will never forget her.”

Bambi recalls her interactions with Henry and knows him to be a good-hearted man. “He always spoke about his love for the Lord,” she said. “His ministry has helped so many people, and he considers it an honor to help those in need.”

A cardiac arrhythmia occurs when the electrical system in the heart misfires. An arrhythmia can be a controlled life-long condition or can become life-threatening, depending on the type of arrhythmia.

Dr. Hamidi happened to be working in the ED again that day. He and his team were able to stabilize Henry and subsequently refer him for further testing.

“It is critical for patients experiencing the signs of a cardiac arrhythmia to seek medical attention,” said Dr. Hamidi.

Henry is quick to acknowledge that he received the same excellent care during this visit as his previous one.

Henry’s testing yielded good results, and he has since returned to serving those in need.

“McLeod Health Dillon will always be my hospital,” said Henry. “Why would anyone not come here for care?”