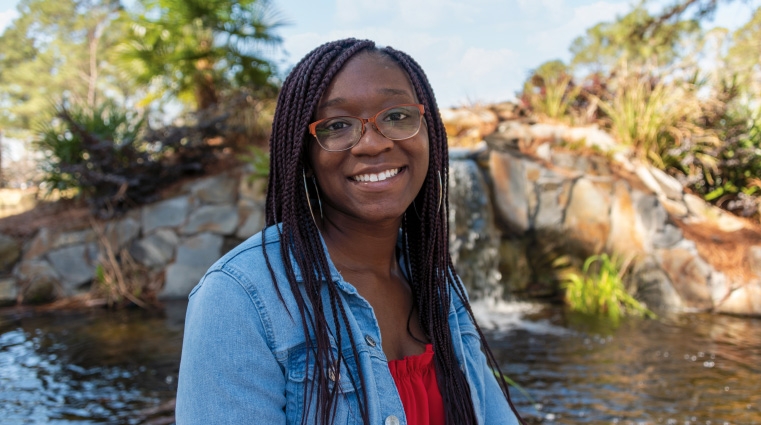 Accident Becomes a Blessing in Disguise

Ariana Jackson, a Sumter native and Francis Marion University student, was enjoying summer break when a car accident on July 4, 2019, changed everything.

“I did not have any major issues after the accident, but I was experiencing some back pain, so I had a CT scan. The next week, I received a call saying there was something on the CT results that needed to be examined further,” recalls Ariana.

The CT scan revealed a large tumor on Ariana’s pancreas. Based on the imaging results, she would need a biopsy of the mass to determine whether or not it was cancerous.

“Thankfully, the biopsy indicated the mass was benign, but it still needed to be removed because of its size,” said Ariana.

Ariana was then referred to McLeod Surgeon Dr. John Richey with Pee Dee Surgical Group, who specializes in complex pancreatic and biliary procedures.

“Based on the imaging and biopsy results, we knew that this was a solid pseudopapillary lesion of the body of the pancreas. Because of its size and location, a distal pancreatectomy and splenectomy surgery would lead to the best possible outcome for Ariana,” said Dr. Richey.

“When left untreated, a solid pseudopapillary lesion of that size can eventually develop into cancer,” he added.

A distal pancreatectomy procedure involves removing part of the body, or “tail,” of the pancreas and leaving the “head” intact. A splenectomy is the complete removal of the spleen.

At McLeod Regional Medical Center, this procedure is performed robotically, which leads to faster recovery times for patients. The robot gives the surgeon greater range of motion during the procedure, while maintaining all the benefits of minimally invasive surgery, including a shorter hospital stay, reduced pain and discomfort, less blood loss, and smaller scars.

“Dr. Richey sat down with me and my parents and explained what type of mass it was and how it could affect me. He and his nurse Donna Foster made both me and my family feel very comfortable about what the procedure would entail,” Ariana adds.

Even though her surgery was performed in the middle of the fall semester, Ariana did not skip a beat with her coursework. As a political science major, Ariana enjoys studying politics and the government.

She is on track to graduate in December 2022 and plans to attend law school and become an attorney. On top of her already busy schedule, Ariana works part time at a local Food Lion grocery store as an Instacart shopper.

“Thanks to Dr. Richey, I was back to my classes and work in no time,” says Ariana.

“Overall, it only took approximately a month to begin feeling completely back to normal. I had a drain for the first week after surgery, then Dr. Richey removed it the following week, and the incisions started to heal by the third week. By week four, I had returned to my classes at Francis Marion.”

A car accident is not usually a serendipitous event, but it was for Ariana.

“Everyone calls the accident my ‘blessing in disguise.’ Thanks to that, I was able to undergo surgery to remove the mass much sooner. Who knows how long it could have kept growing undetected. I’m grateful to Dr. Richey, Donna, and the team at McLeod who made it possible for me to return to feeling normal in just a few weeks.”