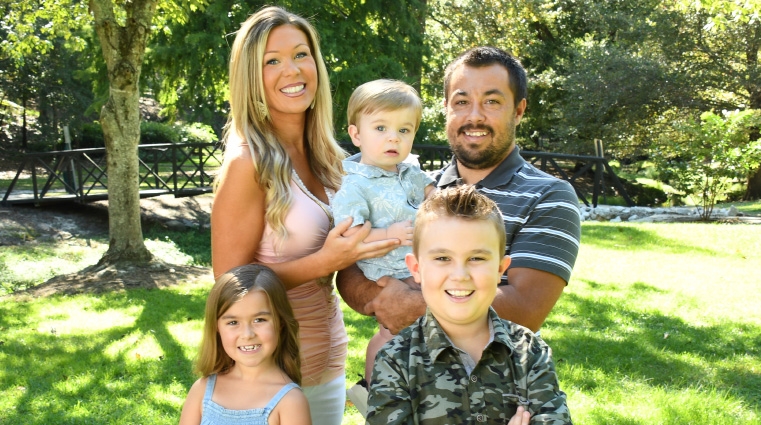 Lauren Tilton knew something was wrong. It was late in the day, when her seemingly healthy eight-day-old baby, Roman, began to breathe differently. His breathing was so fast and labored that his chest noticeably pulled in under his ribs. Because of the COVID-19 pandemic, Lauren worried over taking him to the Emergency Department. She instead decided to go to Roman’s pediatrician, Dr. John Keith with Eastern Carolina Pediatrics, the next morning. The events that would soon unfold were unimaginable.

Lauren and her husband Trey arrived at Dr. Keith’s office and the nurse proceeded to check Roman’s pulse on his foot. Lauren noticed that the nurse was trying to remain calm, but was very concerned. Dr. Keith came in and evaluated Roman and then stepped out to speak with the nurse.

A few moments later, he returned and explained that Pediatric Cardiologist Dr. David Steflik was waiting for them at McLeod as soon as they could get to his office. Roman needed additional testing.

“My heart dropped, and I began to cry because this was confirmation that Roman was sick, and we did not know yet what was happening,” recalled Lauren.

The Tilton family traveled about ten minutes to Dr. Steflik’s office, located on the campus of McLeod Regional Medical Center.

Upon Roman’s arrival to his office, Dr. Steflik proceeded with an echocardiogram, a safe and painless test that allows the doctor to evaluate the anatomy and function of the heart. Lauren noticed the look of concern on Dr. Steflik’s face.

Dr. Steflik diagnosed Roman with severe coarctation, or narrowing, of the aorta. This is one of the more dangerous heart conditions seen in babies and requires prompt treatment.

The aorta is the largest artery in the body and responsible for moving oxygen-rich blood from the heart to the rest of the body. Severe narrowing of the aorta forces the heart to pump harder to move blood through the artery.

“Our top priority in that moment was ensuring that blood flow continued to reach the lower half of Roman’s body to avoid organ damage,” explains Dr. Steflik.

“Ultimately, we needed to open the ductus arteriosus.”

The ductus arteriosus is a blood vessel that connects a baby’s left pulmonary artery to the aorta and allows blood to bypass the lungs while the baby is growing in the womb. Shortly after birth, the ductus arteriosus closes, but Roman’s remained open, which is called a patent ductus arteriosus. This explains why he did so well for eight days and suddenly showed signs of the condition.

Once Dr. Steflik’s nurse connected Roman to a portable monitor, Dr. Steflik quickly walked Roman to the McLeod Pediatric Intensive Care Unit (PICU), with Lauren and Trey following behind him.

When they arrived in the PICU, Pediatric Intensivist Dr. Carl Chelen and his team were ready to begin immediate treatment.

Dr. Chelen placed a catheter into Roman’s femoral vein. This allowed him to infuse a medication called prostaglandin to open the ductus arteriosus and stabilize Roman.

Roman also received a breathing tube to help minimize any extra oxygen demand that his body was utilizing to breathe so fast.

The medical team then began working with ChildReach to arrange for Roman’s transport to an outside facility for additional care. The McLeod ChildReach ambulance features specialized equipment and paramedics trained to transport critically ill babies.

Lauren and Trey were beside themselves.

“Everything happened so fast,” recalled Lauren. “One moment we are in Dr. Keith’s office and the next we are following a specialist to the PICU to save my son’s life. The social worker and several nurses really helped us through those agonizing moments after Dr. Steflik walked Roman into the PICU.

“Once Roman was stable, Dr. Steflik met us outside the unit and explained in detail exactly what was going on with Roman’s heart. I remember he sat down and drew a picture so we could get a better idea of what was occurring. Trey and I were both heartbroken and afraid that we were going to lose our son, but fully confident in his care team.”

Days later, Roman underwent surgical repair for his condition and is now a happy, healthy baby who enjoys being spoiled by his brother Emerson and sister Sadie Pearl.

“I am so thankful that we have access to these services and specialists locally. Without them, my son might not be alive today. Every day is a special day because we never know what we will face. But, I am grateful to know that McLeod is here to provide those services when we need them most.”

Dr. Steflik emphasizes the importance of the immense collaboration that took place in saving Roman’s life.

“A delay of even one or two hours may have resulted in the worst possible outcome,” explains Dr. Steflik. “His artery was extremely narrow, and once it closes, there is no blood flow to the lower body. Because of the collaboration of Dr. Keith, myself, and Dr. Chelen, we stabilized Roman and remarkably, he suffered no organ damage.

“As the region’s Children’s Hospital, we are equipped to quickly diagnose and administer treatment that ultimately saves lives. I am honored to work with this team of local experts.”