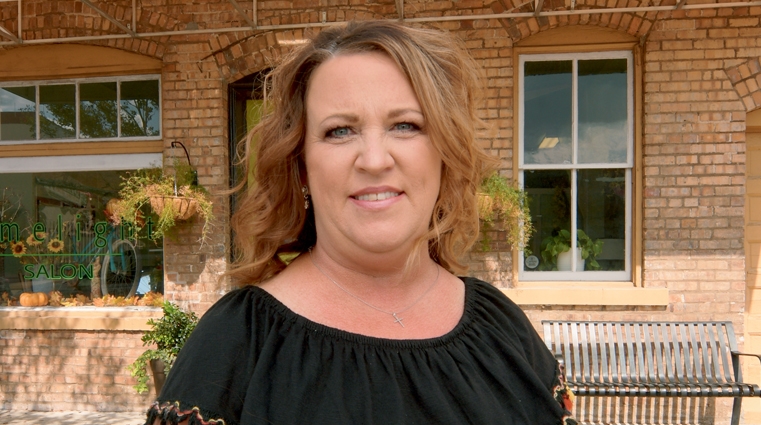 A hair stylist for nearly 40 years, Dawn Wallace maintains a hectic schedule with work and family, including three children. Last December, Dawn noticed some irregular, unpredictable bleeding. This was unusual, as she had not experienced any menstrual bleeding following an endometrial ablation approximately 20 years before.

The issue continued to worsen and interfere with her quality of life, so in January Dawn decided to follow up with her Gynecologist Dr. Michael Davidson of McLeod GYN Specialists.

“I just knew something was not right,” recalled Dawn.

An ultrasound revealed several contributing factors to Dawn’s breakthrough bleeding. A cyst on Dawn’s ovary was the most likely culprit, but she also had fibroids and adenomyosis, which is where the inner lining of the uterus (the endometrium) grows into the muscular wall of the uterus. In addition, the ultrasound showed cervical stenosis, or a narrowing of the passageway through the cervix. This can result from an endometrial ablation.

“Once you have cervical stenosis and an ablation, a hysterectomy is the only treatment option,” explains Dr. Davidson.

Dawn was an ideal candidate for a robotic-assisted hysterectomy, or the surgical removal of a woman’s uterus using a computer to control the surgical instruments.

“If we did not have the capability to perform robotic surgery, Dawn would have required a fairly large incision considering she had fibroids,” explains Dr. Davidson.

“I had no reservations as Dr. Davidson explained the surgery option,” recalls Dawn. “Hearing that I could resume normal activities and return to work within two weeks instead of the traditional six weeks sounded wonderful.”

On the morning of February 26, 2020, Dawn arrived at McLeod Regional Medical Center in Florence to undergo a total hysterectomy.

Dawn describes her experience as a “walk in the park,” only having mild stomach soreness immediately after the procedure. She never even needed pain medicine.

Thanks to the Outpatient Surgery Department’s focus on early discharges – a program called Extended Recovery – Dawn was able to go home the same day of her surgery. Normally, patients would stay in recovery for about four hours before being admitted overnight for observation. With Extended Recovery, patients stay in recovery approximately six to eight hours before going home.

This has many benefits for GYN patients, especially those with chronic conditions and young families. The surgical process no longer disrupts medication management nor requires the additional stress of making family arrangements to accommodate a hospital stay.

“Approximately 90 to 95 percent of patients who undergo robotic procedures go home the same day,” says Dr. Davidson. “Using other approaches, the average is a two- or three-day hospital stay.”

Following surgery, Dawn adhered to Dr. Davidson’s recommendations for the next two weeks and after her follow-up on March 11, returned to work on March 12.

“It was the easiest thing I have ever done,” says Dawn.

“As a GYN surgeon, I am not only operating on my patient, but I am also operating on her family and her job,” says Dr. Davidson. “My patients generally have more reservations about how surgery will affect their life during recovery than the surgery itself.

“With robotics, I feel that I am impacting my patient’s life much less than I would have eight to ten years ago because now I can do the surgery in a way that allows my patient to return to work sooner and with less pain and disruption.”

Dr. Davidson explains that other types of minimally invasive procedures, such as laparoscopies, require the surgeon to manipulate the patient’s abdominal wall which tears through muscle and tissue. The robot, on the other hand, does not allow for this manipulation, restricting the surgery to one local area. This leads to much less pain following surgery, which in turn requires less pain medicine.

“There are two components here working together – the effectiveness of robotic surgery to minimize pain and changes in healthcare’s overall approach to narcotics,” says Dr. Davidson.

“Approximately 95 percent of my surgeries are robotic. When we look at the data – infection rates, outcomes, etc. – we are doing patients a favor with robotic surgery. Patients get back to normal faster and experience a much lesser impact on their home and work lives.”