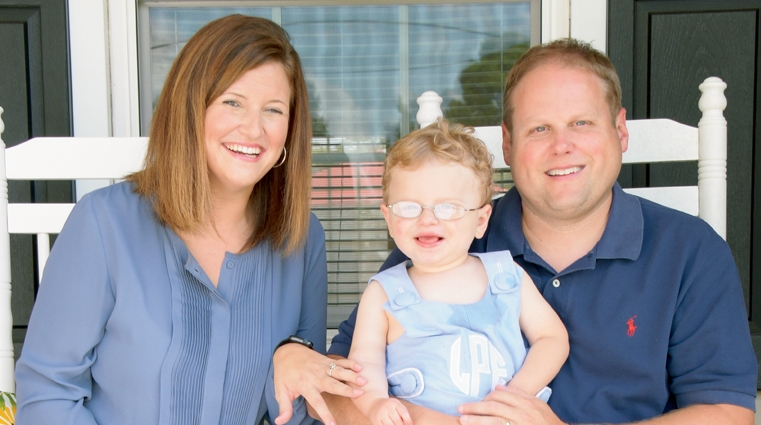 The dramatic events that unfolded on January 5, 2019 would mark Simms and Amanda Porter’s lives forever. At the center of these events was their precious three-month-old son, Lawton.

The day began as most other Saturdays. Amanda woke to feed Lawton, who was officially three months old that day. After his feeding, she placed him in his crib, and he began to cry. But this was an unusual cry, one that Amanda had never heard before.

She picked up him, and he vomited. Amanda called Simms into the room and felt that she should contact the pediatrician. The nurse she spoke with said it was likely a virus and encouraged Amanda to give Lawton Pedialyte and monitor his symptoms.

Moments later, Lawton appeared to have a seizure. Neither one having a medical background, Amanda nor Simms were certain it was a seizure, so they watched him. He vomited again and had another episode.

“At this point, we headed to the McLeod Regional Medical Center Emergency Department,” explained Amanda.

Simms pulled up to the front entrance, and Amanda jumped out of the truck and ran in yelling for help. “I remembered saying, ‘I don’t know if my child is even breathing. I think he’s having seizures.’”

A staff member rushed over to Amanda and grabbed her arm as they ran to the front entrance. They met Simms as he was coming into the ED, carrying Lawton’s car seat. The staff member put his hand on Lawton’s chest and realized he was not breathing. He grabbed the car seat from Simms and rushed Lawton to an exam room in the back. Amanda and Simms followed close behind.

“Doctors and nurses came in from everywhere and just descended on my child,” recalled Amanda.

The team was in the process of venting Lawton when the charge nurse came over to Amanda and Simms to lead them to the waiting area. She comforted Amanda by promising to treat Lawton as if he were her own son. As they left, Amanda could see that Lawton was having another seizure on the bed.

The team rushed Lawton to McLeod Radiology, where they performed a CT of his brain.

Dr. William Naso with Florence Neurosurgery and Spine Center was immediately called in, and he notified the family that emergency surgery was needed.

The scan indicated that Lawton was suffering from a ruptured aneurysm, resulting in bleeding on the brain and subarachnoid hemorrhage, a life threatening type of stroke.

“When I arrived, Lawton was in neurologic distress and actively seizing,” explained Dr. Naso. “He had a dilated pupil -- a sign of impending death -- from brain herniation, which is the shifting of brain tissue from one space in the brain to another.”

The medical team intubated Lawton and transported him directly to the Operating Room, where Dr. Naso performed a craniotomy. This involves making an incision in the scalp and removing part of the bone from the skull -- called a bone flap -- to expose the brain. Dr. Naso then evacuated the hematoma (blood clot) which was compressing the brain.

Using a microscope, Dr. Naso and his Physician Assistant Catherine Soriano worked to clip the aneurysm and keep it from bleeding.

During the operation, Lawton went into cardiac arrest. The anesthesiologist began CPR with chest compressions and resuscitated him.

“Lawton is very fortunate to be alive,” said Dr. Naso. “He would not be alive had it not been for the amazing coordination from an entire team dedicated to his care, including the OR staff, transport technicians, nurses, blood bank and so many more.

“Surgical Technician Amy Jerome played a crucial role assisting and getting the right instruments to us at the right time. If we did not have an OR ready to go when we needed it, Lawton would not have survived. In these critical situations, it is not a matter of every ten to 15 minutes being important, but every 10 to 15 seconds. We had an incredible team of professionals, each who knew their role and performed it better than anyone could have hoped.”

After the procedure, Dr. Naso met with Amanda and Simms, explaining that Lawton had a ruptured giant middle cerebral artery (MCA) aneurysm. This was a rare aneurysm based on three factors -- the size and location of the aneurysm as well as the fact that Lawton was born with it.

“Giant aneurysms such as Lawton’s in his age bracket are very uncommon,” says Dr. Naso. “These are also more likely to rupture.

“As a result of the hemorrhage, Lawton experienced right hemiparesis, or partial paralysis on the right side of his body. However, babies and children are amazingly resilient and can recover and lead a normal life.”

“We could not image anyone else doing Lawton’s surgery,” says Amanda. “Dr. Naso and Catherine are the best, and I credit them as well as the anesthesiologist and the numerous nurses and technicians who I will never know their names, but everyone who was in the room that day.”

Shortly after surgery, Lawton was admitted to the McLeod Pediatric Intensive Care Unit (PICU) for additional monitoring as well as to keep him sedated and let his body recover.

“Dr. Carl Chelen, Dr. Efrain Sanchez and Dr. Thomas Bannister were incredible,” said Amanda. “We saw each of them at different times, and they cared for my son to the best of their ability. The nurses also comforted us and were just as kind to us as they were to Lawton. I would also be remiss if I did not mention the respiratory therapists. They became like family.

Fifteen days later, Lawton was discharged from McLeod Children’s Hospital, but continued to undergo additional vascular imaging and monitoring. An angiogram later showed that the aneurysm was secured and no other aneurysms were present.

Because of Lawton’s right-sided weakness, he immediately started therapy, including occupational therapy, physical therapy and speech rehabilitation, which he continues today.

“Simms and I could not be more pleased with Lawton’s progress,” says Amanda. “Our medical team fully believes Lawton will walk, talk and lead a normal life. But for now, he is writing his own story, and these things will come in his own time.”

Lawton recently celebrated his second birthday. He is crawling on his own and sitting up. He loves to pull out books and flip through the pages and wrestle on the floor with his Daddy.

“We know he has a long road ahead, but we are excited to see what he does with his life,” explains Amanda. “Simms and I look back on the last two years with such gratitude that we made it through. Yes, it was a miracle, but we also believe it was part of God’s plan all along.”

Through every moment of Lawton’s life -- every challenge and every blessing -- God is penning a most beautiful story of hope and healing.