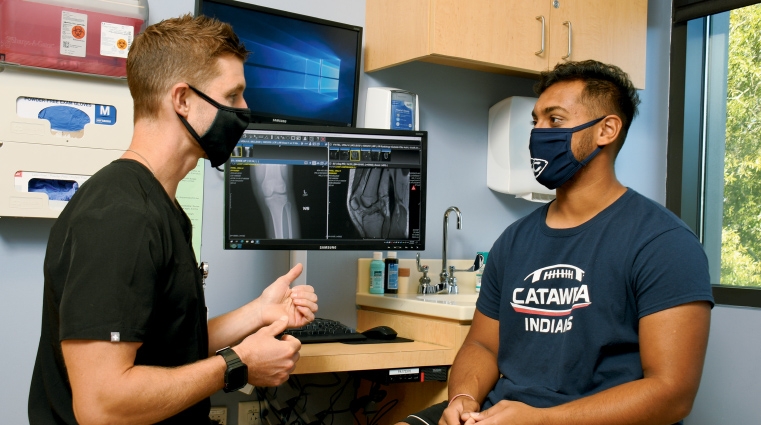 Kicker Writes His Own Comeback Story

Vraj Patel, a 2021 graduate of Wilson High School in Florence, kept a busy schedule his senior year. In the fall, he was the kicker and punter for the Tigers’ varsity football team. In the spring, he was the goalie for the varsity soccer team.

A full-time student in the International Baccalaureate (IB) Program, Vraj was also taking advanced classes and completing extensive requirements to graduate with an IB Diploma. But everything changed that spring, when a devastating knee injury threatened to derail the trajectory of his athletic future.

With the spring semester of his senior year at Wilson in full swing, Vraj attended soccer practice as normal on Wednesday, February 3. While running down the field, he made a turn, felt a pop, and was on the ground instantly.

“I tried to stand, but I could not balance on my leg,” said Vraj. “I could not even extend it at all.”

McLeod Sports Medicine Athletic Trainer Shalik Brown rushed to his side, assessing him and performing a series of on-field tests to determine the extent of the injury.

“I immediately suspected that Vraj tore the ACL in his left knee. I connected Vraj with McLeod Orthopaedics for further evaluation because of the severity of the injury,” Shalik details.

The next day, Vraj had a follow-up appointment with Dr. Art Jordan, a Sports Medicine Specialist at McLeod Orthopaedics in Florence.

“During his visit with me, we took an MRI of Vraj’s knee,” recalls Dr. Jordan. “After going over his results, I referred him to my partner Dr. DiPaolo for a surgery consultation.”

Dr. Zac DiPaolo, a surgeon with McLeod Orthopaedics specializing in sports medicine, assessed the injury and advised Vraj on the treatment plan.

“Vraj tore both his medial and lateral meniscus and completely ruptured his anterior cruciate ligament (ACL). Due to the severity and complexity of his meniscal tears, we decided to proceed with a two-stage procedure. On February 25, we repaired the medial and lateral menisci during the first stage. He then underwent 10 weeks of physical therapy to regain knee range of motion and strength. We returned to the operating room on May 6 to reconstruct his ACL,” explains Dr. DiPaolo. “Vraj’s number one goal was to get cleared to play again, so based on the extent of the tears, two surgeries would yield the best results.”

Vraj adds, “I wanted to do whatever it took to get back on the field sooner, so if that meant two surgeries, then I was game for it.”

After both surgeries, Vraj completed rehabilitation at McLeod Outpatient Rehabilitation and Sports Medicine. He worked with Melissa Sanchez and Matt Ferguson to complete his physical therapy.

“Once I began compound lifting, Matt actually started working out with me, which was so motivating. Both therapists pushed me to work hard during my rehabilitation. I never wanted to skip a repetition during my time in rehab and then regret not trying my hardest.”

It was important to Vraj to get as much as he could out of the one-hour rehabilitation sessions. He also made the effort to practice the same exercises in his spare time.

“I progressed to the point where I was able to complete both my rehab exercises and my football lifting exercises so I could stay in shape and prepare for college football.”

Vraj’s soccer season ended after his injury, but he continued to support the team for the remainder of the season. His name was added to the roster as Assistant Coach after his first surgery, for participating and contributing to the team even while sidelined.

“Even though I could not play, I helped train the goalkeeper, trying to prepare him for every possible scenario as we practiced field goals together,” Vraj recalls.

In the spring, Vraj signed with Catawba College to be the kicker for their NCAA Division II football team.

“Wilson has a tradition where many of the soccer players who also served as kickers and punters on the football team have gone on to be college football kickers. I am excited and proud to continue that legacy,” Vraj explains.

As a result of his injury and surgeries, Vraj decided to medically redshirt with the Catawba College football team for his freshman year. This means that he can preserve a year of athletic eligibility while he is recovering from his injury.

“If I can fully focus on recovery, then I will be back next season doing what I love, kicking field goals through uprights. Dr. DiPaolo did an excellent job with my surgeries, and I am firing on all cylinders from my rehab. I can do nearly everything but kick at this point,” Vraj details.

“Vraj is doing great because of his determination and perseverance. My job was easy; he did all of the hard work,” Dr. DiPaolo adds.

Despite his season-ending injury and having to face two surgeries during his senior year of high school, Vraj and Dr. DiPaolo teamed up yet again in the summer.

“Dr. DiPaolo knew I was interested in the medical field, so he let me spend the summer shadowing him in the clinic and in surgeries. I had a blast and learned so much from him. Hearing Dr. DiPaolo talk to patients has taught me so much about shoulders and knees -- more than I learned even from my own knee surgeries. Dr. DiPaolo is more than a great doctor -- he is a great teacher and a great person,” adds Vraj.

While shadowing him, Vraj saw a wide variety of patients in clinic across the full spectrum of conditions and problems. He also had the opportunity to be present during multiple surgeries, which gave him insight into how surgical procedures work. Overall, Vraj observed at least a dozen surgeries, including some at the Outpatient Surgery Center in McLeod Medical Park Five and also in the McLeod Pavilion.

Vraj is considering medical school in the future. He enjoys helping athletes and has an interest in sports medicine. As an athlete himself, Vraj understands how difficult recovery can be and wants to help injured athletes get back to their original performance level.

“My experience with McLeod was amazing. Everyone from Shalik, the athletic trainer at Wilson, to Dr. Jordan and Dr. DiPaolo at McLeod Orthopaedics, to Melissa and Matt with McLeod Outpatient Rehabilitation, truly cared about me and did everything to give me the best recovery possible.

I would not have the opportunity to continue my kicking career without my incredible care team,” states Vraj.