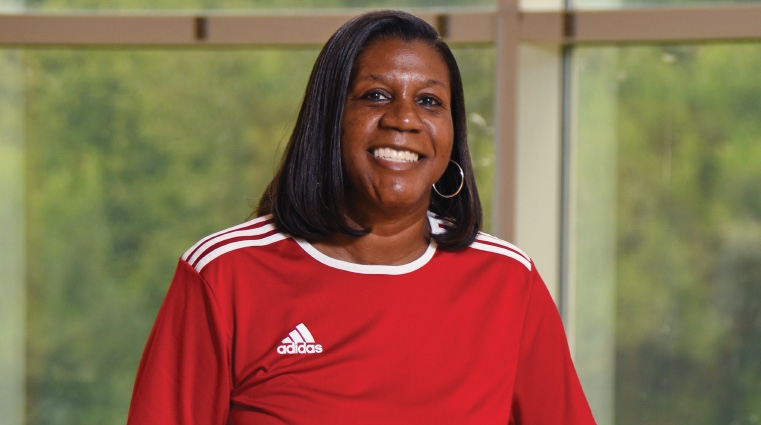 Head Coach Gets an Assist from McLeod Orthopaedics

Coach Jeri Porter is not one to stay on the bench. During games, the Francis Marion University women’s basketball team head coach can be seen pacing the court sidelines, coaching her squad and analyzing the next play. However, an old injury threatened to keep her on the bench.

Her story actually begins in January 1993, when a terrible car accident dislocated her left hip. She was told that it could lead to arthritis, but went the next 20 years without any major issues.

Around her early forties, Jeri began noticing some arthritic ache in her hip, but the pain was manageable with over-the-counter anti-inflammatories. However, after several years of managing the discomfort on her own, Jeri’s pain finally escalated to the point that she was unable to walk at times. Simply standing up out of a chair would cause her hip to lock up.

“The pain made my duties as a coach much more difficult,” explains Jeri.

“I cut my standing time into increments just to make it through a two-hour practice, and hours-long bus travel to away games became miserable.”

The final straw for Jeri was when she began to lose sleep at night due to her hip pain.

Jeri decided it was time to seek further treatment, so she called to schedule an appointment with McLeod Orthopaedics. She saw Physician Assistant Dean Huiet, and he ordered X-rays of her hip.

“He said to me, ‘Coach, you have no cartilage left. You are experiencing pain because it is bone-on-bone.’”

To treat the degenerative arthritis pain, the first line of treatment for Jeri was quarterly steroid injections in her hip. These injections helped, but they did not completely alleviate her pain. Jeri added that after five to seven weeks of relief, she regressed to where she started.

One year and four injections later, Jeri called McLeod Orthopaedics to see Physician Assistant Dean Huiet again and reevaluate her situation. “Dean and I decided together that the shots were not a long-term solution,” said Jeri.

“He offered that since I was younger and fairly active, I could be an ideal candidate for an outpatient anterior hip replacement, and he matched me with Dr. Chad Thurman.”

Dr. Thurman, a surgeon with McLeod Orthopaedics since August 2019, specializes in the direct anterior approach for hip replacement surgery.

“Jeri was an ideal candidate for an anterior hip replacement because of her active lifestyle,” explains Dr. Thurman.

On the day of her surgery, July 7, 2020, Jeri arrived at McLeod Regional Medical Center at 5 a.m. and by 5 p.m. she was at home relaxing in her recliner.

She received physical therapy in her home with McLeod Home Health and then continued rehabilitation with a local facility.

“The moment I came out of surgery, I only had pain from the procedure, and there was no more pain from the degenerative arthritis,” recalled Jeri. “Dr. Thurman said I would get to the point after six or seven months where I would not even think about my hip.”

In six weeks, she was walking and exercising regularly. After six months, she returned to her full coaching routine prior to the arthritis pain and had already lost 20 pounds.

“From scheduling to intake to recovery, my overall experience was amazing, and I feel extremely blessed to have had Dr. Thurman and the McLeod team care for me,” explained Jeri. “He is innovative and one of the best in the country at what he does.”

Jeri recommends McLeod to anyone considering a hip replacement.

In her sixth year as women’s head basketball coach at Francis Marion University, and 28 years into her coaching career, Jeri felt she had perhaps five more years of coaching ahead of her. But now, after her anterior hip replacement, she feels she can keep going longer.

“This surgery has given me a new lease on my family, my career and my life. I am so grateful and excited to be pain free. If I could change anything about the process, I just would have done it sooner.”