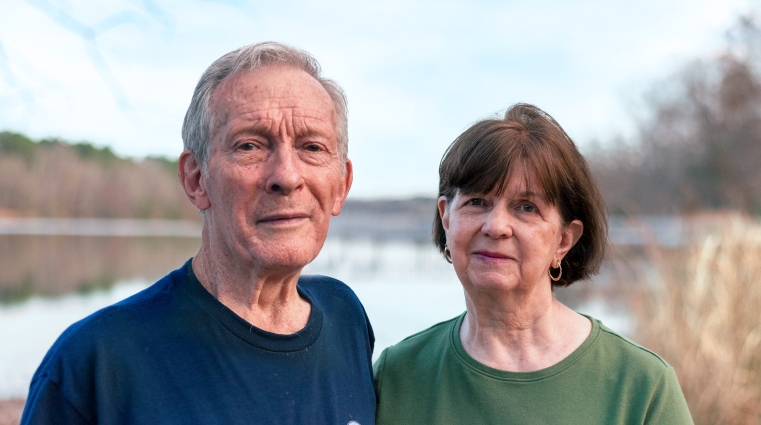 A harrowing experience for Richard McCoy of Summerton, South Carolina, that almost cost him his leg turned into a positive encounter when an unknown problem with his heart was also unearthed and repaired.

Richard became concerned when his leg suddenly felt ice cold and numb. “When it first started, I could walk on it, but as time passed the pain level increased to the point I could barely walk,” recalled Richard.

He and his wife Dianne sought care at the McLeod Health Clarendon Emergency Department. During the assessment, Dr. Steve Nathanson explained Richard’s symptoms meant a loss of blood flow to his leg.

To return the blood flow, Richard needed to be urgently seen by a Vascular Surgeon.

“Dr. Nathanson referred me to McLeod Vascular Surgeon Dr. Eva Rzucidlo at McLeod Regional Medical Center,” said Richard. “He told me Dr. Rzucidlo is outstanding in her field and that she would take good care of me.”

“Dr. Rzucidlo said she would do her best, but was unsure if she could save my leg,” said Richard.

“For any bypass surgery to work well it has to have a good beginning artery and a good artery to bypass to,” said Dr. Rzucidlo. “Arteries with blockages further in the leg, or with only one open blood vessel, increases the risk of a failed bypass. I did not know until I started Richard’s surgery what the outcome would be; fortunately, I was able to save his leg."

“I am eternally grateful,” said Richard. “If it had not been for Dr. Nathanson and Dr. Rzucidlo, I realize I could have lost my left leg. It is to their credit that I am still walking today.”

As part of his pre-surgery testing Richard underwent an echocardiogram. The results indicated a heart valve issue but returning blood flow to his leg had to be addressed first.

After the completion of Richard’s vascular surgery, a transesophageal echocardiography, also known as a TEE, which produces pictures of the heart using ultrasound, was scheduled with McLeod Interventional Cardiologist Dr. Ravi Parikh.

Common symptoms of mitral regurgitation include fatigue, shortness of breath, swelling and an irregular heartbeat. Patients may also have an extra heart sound, known as a heart murmur, that is produced when blood flows turbulently or in the wrong direction.

“I could tell I was not 100 percent,” said Richard. “With my daily chores or working in the yard, I would become short of breath. I did not realize it was related to my heart.”

“Our treatment goals focus on decreasing the severity of mitral regurgitation, lessening strain on the heart and improving quality of life for patients experiencing these symptoms,” said Dr. Parikh. “Medications cannot fix a valve problem, but they can target things like high blood pressure that make the regurgitation worse. Those with severe cases, like Richard, will usually need some type of surgical repair.”

“Our treatment goals focus on decreasing the severity of mitral regurgitation, lessening strain on the heart and improving quality of life for patients experiencing these symptoms,” said Dr. Parikh. “Medications cannot fix a valve problem, but they can target things like high blood pressure that make the regurgitation worse. Those with severe cases, like Richard, will usually need some type of surgical repair.”

A specialized team consisting of an interventional cardiologist, a cardiothoracic surgeon and a cardiac anesthesiologist, worked together to determine Richard’s eligibility for this procedure. Tests to measure the size of his valve helped the team establish if the MitraClip was a good option for his treatment.

Performed in a Cardiac Catheterization Laboratory, X-ray imaging and ultrasound technology is used to deliver the MitraClip to the correct position in the heart via a catheter through a blood vessel in the leg. Once in place, the clip attaches to the mitral valve leaflets, fastening them together. This improves the closure of the valve and reduces the backflow of blood.

Two months after his surgery to repair the blockages in his leg, Richard underwent a MitraClip procedure with Dr. Parikh to repair his leaking mitral valve.

“Richard came to the office for his follow-up visit one month after his procedure and reported that his symptoms had significantly improved,” said Dr. Parikh.

“This is not my first heart valve surgery,” said Richard. “A few years ago, I had my aortic valve replaced through an open-heart surgery. The recovery from that operation was much more extensive since I had a large surgical incision.

“Four weeks after my MitraClip procedure, I returned to my normal routine with no more shortness of breath,” said Richard. “I feel blessed to have my health. I may be retired, but I still appreciate that now I can do the things I want to do when I want to do them.”