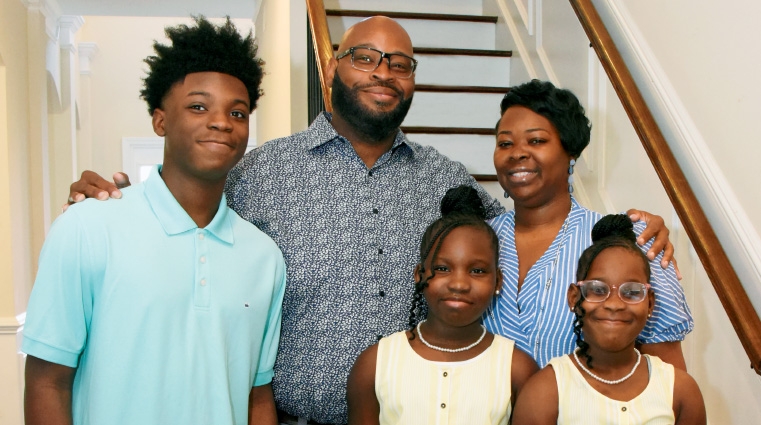 The sound of hard coughing from her husband Ron Kimpson woke Delisha at 2:00 a.m. on January 5, 2021. She asked if he was okay, but received an incoherent, mumbled response. After several prompts, Delisha helped him sit on the side of the bed. Ron simply stared at his hands. Alarmed at this unusual behavior, Delisha called 911. EMS quickly arrived and transported Ron to McLeod Regional Medical Center.

At the hospital, McLeod Emergency Physicians performed a CT scan and an X-ray. Not only did the results show pneumonia, but also indicated Ron had experienced a heart attack as well as a stroke with a blood clot obstructing blood flow to the brain. Treating Ron’s stroke became the top priority. McLeod Hospital Neurologist Dr. Timothy Hagen and McLeod Interventional Neuroradiologist Dr. Basil Shah were called in for a consultation.

“The gold standard of care for patients diagnosed with an Ischemic stroke is a drug called tissue plasminogen activator (tPA), which dissolves the blood clot,” said Dr. Shah. “If tPA is not successful, we can attempt to remove the clot with the help of sophisticated devices to restore blood flow and prevent further damage.”

“Ron had a ‘wake-up stroke,’ meaning when he went to bed earlier that evening it would be his last known normal,” said Dr. Hagen. “This was problematic because tPA has a four-and-a-half-hour window of opportunity for administration. Since he woke up with the stroke we could not determine when it began, which eliminated Ron as a candidate for the tPA clot-busting medication.”

Dr. Hagen and Dr. Shah met with Delisha and explained that the blood clot needed to be removed from Ron’s brain using a procedure called Thrombectomy.

A Thrombectomy involves using advanced imaging technology to remove a blood clot from an artery in the brain and restore blood flow. To remove the clot, a catheter, or long flexible tube, is inserted through an artery in the groin up to the blocked artery. Time is of the essence with the Thrombectomy procedure, and not all hospitals are equipped with the staff, training and equipment necessary to perform this procedure.

At McLeod Regional Medical Center, a dedicated Neurointerventional Bi-plane X-ray Suite for such procedures as Thrombectomy has an imaging system that produces highly detailed three-dimensional views of blood vessels heading to the brain and deep within the brain.

This technology allows doctors to follow the blood flow path to the exact location of the issue. Designed for the emergency treatment of stroke patients, the suite includes two rotating cameras, one on each side of the patient, to take images simultaneously. The cameras can be rotated to study the blood vessels from multiple angles.

The Bi-plane X-ray imaging helps guide the catheter to the blocked artery. Once there, a stent retriever, a tiny net-like device, is inserted into the catheter and guided to the blockage to capture the clot and return blood flow back to the brain.

“I was scared,” said Delisha. “I had faith in the hospital’s capabilities, but this was my husband. I walked by his side as they wheeled him to surgery.”

To help with his recovery Ron received assistance from McLeod with cardiac rehabilitation and speech therapy.

“Ron is doing so well,” said Delisha. “You would never know he had a stroke at the beginning of the year.

“He is a diabetic and on blood pressure medicine, but he never took these conditions too seriously before his stroke. For the 17 years we have been married, I would consistently remind him to take his medicine, but he would not do it. Now, he does it all on his own. Ron is more concerned about his health than he has ever been,” added Delisha.

Ron had originally been scheduled to undergo a heart catheterization one day after his stroke occurred with McLeod Cardiologist Dr. Anil Om. Ron’s Primary Care Physician Dr. Charlotte Francis of Pee Dee Regional Family Medicine referred him to Dr. Om when he went to her with complaints of shortness of breath and cough.

When Ron finally underwent his heart catheterization, Dr. Om diagnosed him with a weak heart due to his unmanaged diabetes and blood pressure. Dr. Om prescribed medication and to help increase his heart strength, Ron began daily walks and bike rides.

“This stroke was a wake-up call for me,” said Ron. “I have made positive changes in my life. I make sure to get out and move each day while setting goals to lose weight and do whatever is necessary to stay on track and get healthy.

“My family has been incredibly supportive and even embraced these changes by eating healthy meals. In my youth I never ate healthy and now, I am paying for it as an adult at only age 40. I do not want my children to ever have to go through what I experienced.”