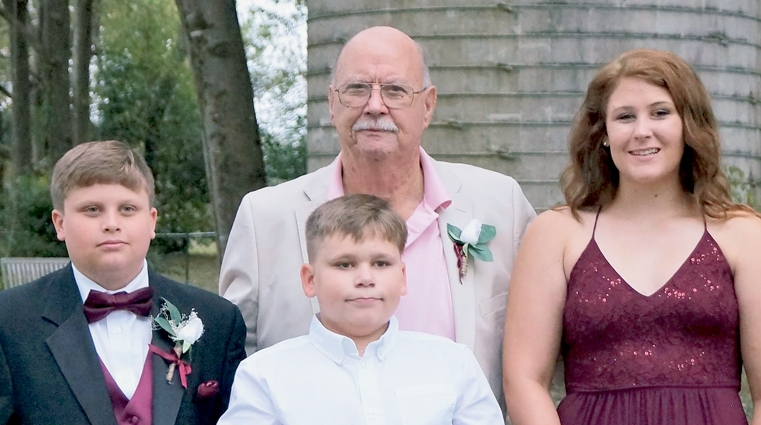 The Vascular Care You Need Now

Vascular disease will not get better on its own. Patients owe it to themselves to get the best and most timely care possible to preserve their health. Bert Mays and Robert Bang share their stories of how they learned firsthand how delaying care can potentially cost more than you are willing to lose.

BERT MAYS
Who does not love having a brand new pair of shoes? But when those new shoes cause blisters and lead to sores that will not heal that feeling quickly dissipates especially when they are a linchpin to potentially losing your foot.

Hartsville resident Bert Mays can attest to what happens with slow-healing wounds. Bert had worn new shoes that gave him blisters. The blisters never healed and developed into ulcers; therefore, he sought help at a wound care center in Hartsville. The center worked with Bert for one month trying to heal the multiple ulcers on his foot. After recognizing his wounds needed care from a wound specialist, the center referred Bert to McLeod Vascular Surgeon Dr. Eva Rzucidlo.

Amputation is the surgical removal of all or part of an extremity such as a leg, foot or toe. Approximately 1.8 million Americans are living with an amputation, with the leg being the most frequent amputation surgery. Poor circulation from damage or narrowing of the arteries called Peripheral Arterial Disease becomes the most common reason for amputation. There are approximately 18 million Americans suffering from Peripheral Arterial Disease with 160,000 related amputations performed annually.

Bert made an appointment to see Dr. Rzucidlo at her McLeod Vascular Associates office located at McLeod Medical Park Hartsville.

“Dr. Rzucidlo explained to me that the limited blood flow kept my wounds from healing,” said Bert. “By the time I got to her it was too late for her to save my big toe. She had to remove it to keep the gangrene from spreading to the rest of my foot.”

“Bert is a miracle patient,” said Dr. Rzucidlo. “At the point he came to see me, he was at a high risk of losing his leg. I needed a clear blood vessel to bypass the blockages in his leg to restore the blood flow to his foot. His test results showed several blockages, which left only one, two millimeter blood vessel that could be used for the bypass in order to save his leg.”

The difficult six-hour surgery became Bert’s only chance to keep his leg. At the completion of the operation his foot was properly warm and pink to the touch and over the next several weeks it continued to heal.

“Recent blood work revealed Bert also has diabetes,” said Dr. Rzucidlo. “Diabetics are at increased risk for Peripheral Arterial Disease and have a higher risk for developing foot ulcers. Anyone with wounds slow to heal should talk to their physician about a referral to a vascular surgeon to avoid the possible risk for amputation.”

Bert remains under Dr. Rzucidlo’s care for monitoring of his circulation, which Dr. Rzucidlo reports continues to look clear.

“Dr. Rzucidlo and I have a good relationship,” said Bert. “I can talk freely with her and she answers all of my questions. She is the angel who saved my leg. I put myself in the position of almost losing my leg, but Dr. Rzucidlo got me out of it.”

At 72 years young, retirement is not in Bert’s vocabulary as he works full-time at Brown’s RV in McBee and spends his remaining spare time with his five grandchildren. And, thanks to Dr. Rzucidlo, Bert says, “I would not be where I am today if it was not for Dr. Rzucidlo and McLeod.”

ROBERT BANG
When Robert Bang, originally from Queens, New York, retired to Pawleys Island, South Carolina, he looked forward to spending days by the beach and enjoying his favorite hobbies. Robert keeps a busy schedule as a member of a bowling league and plays golf a couple of times each week.

One July morning, Robert joined his team at the local bowling alley. The next day, he experienced soreness in his leg. Robert took some ibuprofen and went to bed. Upon waking the next day, his leg continued to hurt, but he pushed through and headed to the golf course. During the game his leg began to cramp, at first intermittently then constant. Robert had never left a match, but that day his pain overtook him. He left his golf partners on the course with two holes remaining. Robert continued to self-medicate, using a heating blanket to get relief. The next day, he woke and felt a knot in his leg. He also noticed that his foot felt cool. Robert’s cousin, a Physician Assistant, urged Robert to visit his local healthcare provider.

Robert’s Nurse Practitioner examined his foot and sent him to the local emergency department (ED), where he underwent a sonogram. The results of the test ruled out blood clots. The ED physician advised Robert to follow up with his Nurse Practitioner the next day. By this time, Robert’s foot worsened and was cold. Robert’s Nurse Practitioner sent him to the emergency department nearby, where he was diagnosed with acute limb ischemia. This condition occurs when there is a sudden decrease in blood flow to a limb and can have devastating consequences if not treated immediately. The medical team contacted Vascular Surgeon Dr. Joshua Sibille with Mcleod Vascular Associates to arrange for emergency surgery at McLeod Health Seacoast.

Robert’s 50-year smoking history significantly increased Robert’s chances of developing vascular disease. Smoking accelerates the hardening and narrowing process in arteries. Stiff, narrowed arteries are common in elderly people, but for smokers that process starts earlier, effectively giving them “old” arteries. “Mr. Bang suffered with a severe circulation deficit in his right lower leg,” said Dr. Sibille. “If he would have waited a few more hours, we would not have been able to save his leg.”

Upon Robert’s arrival to McLeod Health Seacoast, the operating room team prepared to him for surgery. Dr. Sibille performed a surgical bypass procedure to restore Robert’s blood flow. This technique is used to bypass diseased blood vessels in the lower leg and foot. To bypass the blockage, Robert’s blood was redirected through a healthy blood vessel. Dr. Sibille carefully observed Robert’s progress for the next six days in the hospital.

“Dr. Sibille has a fantastic bedside manner and disposition. He continually kept my family updated throughout my procedure until I was discharged. I have been extremely pleased with the care I received from Dr. Sibille and McLeod Health Seacoast,” recalls Robert. “Since my experience, I have quit smoking. My other leg shows signs of the same condition, so I have a follow-up procedure planned early next year before it worsens.”

“In Mr. Bang’s case, he fortunately identified the culprit responsible for his poor health before it was too late,” said Dr. Sibille. “His decision to quit smoking will significantly improve his overall health.”

Today, Robert is back on the golf course enjoying the beautiful weather and time with friends.