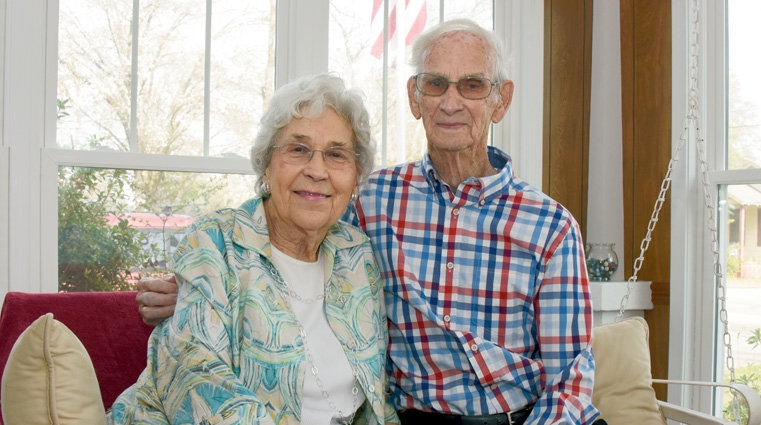 A dear friend once advised Gilbert Baker, “If you don’t have something to do that makes you happy, you won’t be around for very long.” At 91, Gilbert has taken his advice to heart. After retiring from his career as a Ford mechanic in 2000, Gilbert returned to his first love – jukeboxes.

His love of jukeboxes started in his youth. Gilbert’s strict parents would not allow music in the house. Gilbert recalled how much he enjoyed going to the country store to listen as music played on the jukebox.

Now, he spends his free time repairing jukeboxes, many of which are on display in his family home.

Born and raised in Bishopville, South Carolina, Gilbert says he “believes in God one hundred percent.” He also believes that God had a hand in what happened to him that day back in November.

“My story really began two weeks before Thanksgiving,” recalled Gilbert. “I noticed a tightness in my chest when pushing the garbage can out to the side of the road.”

On Thanksgiving Day 2019, he experienced a feeling similar to indigestion, but not related to any turkey dinner he ate. The next day, Gilbert still felt ill. An elevated blood pressure reading served as a confirmation for Gilbert that he should go to the hospital.

After consulting with their children and grandchildren, Gilbert and Ruby, his wife of 67 years and mother of their three children, decided that McLeod Regional Medical Center was the best option for Gilbert’s care.

“When we arrived at the Emergency Department, I thought we would have to wait but a staff member brought me a wheelchair and wheeled me to an exam room right away,” said Gilbert. His symptoms had progressed to chest pain and shortness of breath.

Testing in the Emergency Department indicated that Gilbert’s troponin levels, the levels to help determine heart injury, were slightly elevated. Gilbert had not yet suffered a heart attack.

From the Emergency Department, Gilbert was admitted to the Coronary Care Unit (CCU) under the care of McLeod Cardiologist Dr. Nicolette Naso.

Given Gilbert’s previous history of a heart attack at the age of 56 and his current symptoms, Dr. Naso explained to the family that he would need a cardiac catheterization. It was scheduled for the following Monday.

Ruby suggested Gilbert get some rest. “I fell into a deep sleep,” said Gilbert. “When I woke, my family and our pastor had arrived, and they all had tears in their eyes. They explained to me that my heart had stopped and one of the nurses

Gilbert had experienced a heart attack. His heart catheterization could not wait until Monday. The doctors explained the risk involved and the chance that Gilbert might not make it through the procedure. They also clarified that if they did not attempt to clear his blockages and implant stents, he would have possibly one week to live.

The family made the decision to have the procedure. McLeod Interventional Cardiologists Dr. Brian Blaker and Dr. Evans Holland obtained permission to perform Gilbert’s heart catheterization.

Extended family members rallied around Gilbert, coming to the hospital to support each other while they waited. Gathered in the waiting area, a very grateful family finally received good news. The doctors cleared all of Gilbert’s blockages and placed five stents into his coronary arteries.

During Gilbert’s complex stenting procedure, the physicians used an Impella device, which temporarily assists the pumping function of the heart to ensure blood flow is maintained to critical organs.

“Mr. Baker had blockages in five different locations,” explained Dr. Holland. “One was in his left main artery, and one was in a very difficult location to clear. Dr. Blaker and I are thankful we were able to work together to help him.”

“I had a great-granddaughter from Bluffton, only four weeks old at the time, that I had never met,” said Gilbert. “Her parents named her Ruby after her great-grandmother. As soon as they heard about my situation, they put Ruby in the car and drove to McLeod.

“After my procedure, they wheeled me out of the Cath Lab into the hallway where my family greeted me and placed Ruby next to me. It was such a blessed moment.”

Gilbert’s recovery care took place in the Cardiology Nursing Unit. His family says he does not like to slow down, which he proved true. The next day, he returned to walking his normal fast pace.

Today, Gilbert no longer experiences pain while bringing the garbage can to the road, and he is back to repairing his beloved jukeboxes.

“I would like to thank the doctors, nurses and everyone at McLeod who cared for me and the role they played in saving my life,” said Gilbert. “I pray for them each night just as they prayed for me.

“McLeod treated me so well that I would never go to any other hospital,” added Gilbert.

With the help of Gilbert’s dedicated care team at McLeod, a heart attack couldn’t stop the music in his heart.