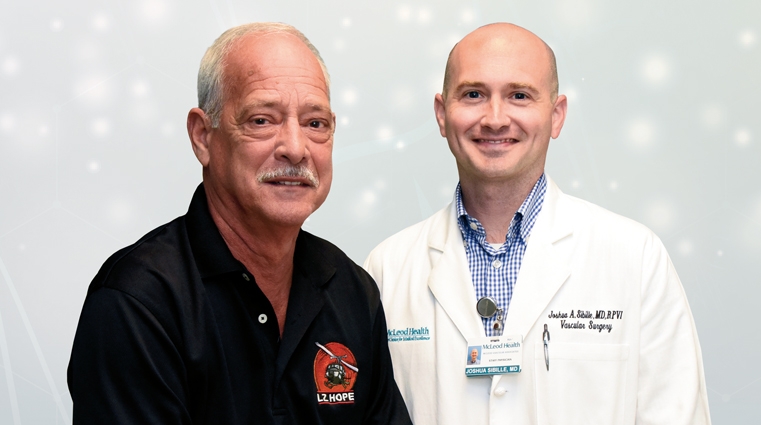 “I suspected trouble when I could not maneuver a spatula while cooking,” said Joseph. “My wife suggested we head to McLeod Health Seacoast as I had just undergone two procedures earlier that week. We wanted to ensure I was recovering well and there were no other health issues.”

Defined as a temporary lack of blood and oxygen going to the brain, a TIA often results from the narrowing of the carotid arteries. TIAs are also signs of an impending stroke. Risk factors include: age (mostly affects individuals 60 years of age or older) as well as patients who have diabetes, experience weakness in extremities, have difficulty with speech or experience a TIA lasting more than ten minutes.

Dr. Sibille recommended a carotid endarterectomy procedure to remove the blockage, or plaque, from the artery starting with the most critical carotid. Eventually both of Joseph’s carotids were repaired with minimal scars to show for it.

“Mr. Longo came to me experiencing stroke-like symptoms,” said Dr. Sibille. “Fortunately, he quickly sought care in the McLeod Health Seacoast Emergency Department as his prognosis could have been life threatening. TIAs are quite common and often overlooked, which can cause irreversible damage if not identified and treated.”

“I have come to McLeod Health Seacoast for various other procedures and tests, and I trust them completely,” added Joseph. “Once I talked with Dr. Sibille about my prognosis, I had full faith in him and his ability. This hospital offers excellent care for this area. There are many specialists in place to handle any type of emergency.”