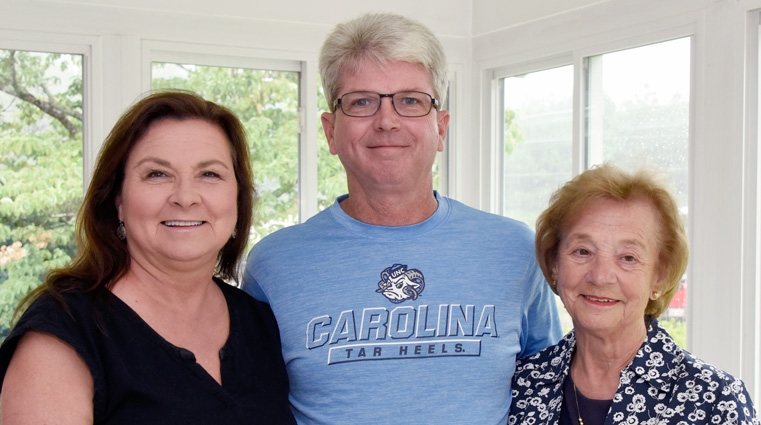 A Wake-up Call to Live For Today

A stroke occurs when a section of the brain loses blood supply and stops working. When this happens, the part of the body that the injured brain controls ceases to function as well. The prognosis and recovery for a person who suffers a debilitating stroke is contingent upon how quickly they receive proper stroke care.

Terry Whitley recalls suddenly not feeling well. Knowing he needed help, Terry managed to call his mother-in-law Carolyn and his wife Denise at work. Carolyn arrived at Terry’s house in Fairmont, North Carolina to check on him.

She immediately noticed his slurred speech. Realizing he may be experiencing a stroke, Carolyn drove him to McLeod Health Dillon Emergency Services. By the time they arrived, Terry could not speak and lost feeling on the left side of his body.

At McLeod Health Dillon, a CT scan indicated a blood clot in Terry’s brain caused a stroke. Fortunately, Terry was a candidate for the clot buster drug tPA (tissue plasminogen activator), the only FDA-approved treatment for strokes caused by a blood clot interrupting blood flow to a region of the brain.

The medical team administered the tPA medication to dissolve the clot and contacted McLeod Air Reach for transportation to the McLeod Regional Medical Center Stroke Unit.

Terry met McLeod Vascular Surgeon Dr. Carmen Piccolo in the Stroke Unit. Further testing revealed a blockage in his right carotid artery. The carotid arteries, the main arteries to the brain, carry blood flow on each side of the neck up into the brain.

“Dr. Piccolo explained to me that my blockage was a soft, spongy, plaque, and the safest procedure to clear out my artery would be TCAR,” said Terry.

TCAR, a minimally invasive carotid artery treatment, temporarily reverses the patient’s blood flow to keep blood clots away from the brain and prevent a stroke. Placement of a stent inside the artery helps keep it clear of plaque and minimizes the risk of additional strokes.

Performed through a small incision at the neckline, a soft, flexible tube, placed directly into the carotid artery, connects to a filter system that directs the blood flow away from the brain and captures small pieces of plaque that may come loose during the procedure. The blood is filtered and returned through a second tube placed in the patient’s thigh.

“I had a headache prior to the surgery,” said Terry. “Two hours after the surgery the headache disappeared. My speech also improved, and I could move my arm and leg again.”

Terry spent a week in the McLeod Stroke Unit under the care of stroke-trained nurses and Dr. Timothy Hagen, Medical Director of Stroke and Neurology Services for McLeod Regional Medical Center.

“Dr. Hagen showed me an image of Terry’s brain scan and explained that he had experienced a massive stroke,” said Denise. “Seeing the size of the stroke really shook me up.

“Terry’s stroke became a wake-up call for both of us. You never know what tomorrow holds. We had always planned on retiring to the White Lake area one day, but this experience made us say, ‘Why wait?’ We put our house on the market, and it sold in 24 hours. This was our confirmation that we made the right decision,” explained Denise.

After his discharge from McLeod Regional Medical Center, Terry continued his recovery at Encompass Health Rehabilitation Hospital in Florence.

“After the first week of rehabilitation, I was mobile with the aid of a walker. Two months following my stroke, I no longer needed walking aids. I have now been cleared to drive, and I’m even singing in our church choir again.

“I am only 57 years old and never thought a stroke would happen to me. The Good Lord has me in His hands, but thanks to everyone’s quick actions -- from my mother-in-law in recognizing the stroke signs to the Emergency Team at McLeod Health Dillon and the surgical care of Dr. Piccolo, I’m alive and well,” added Terry.