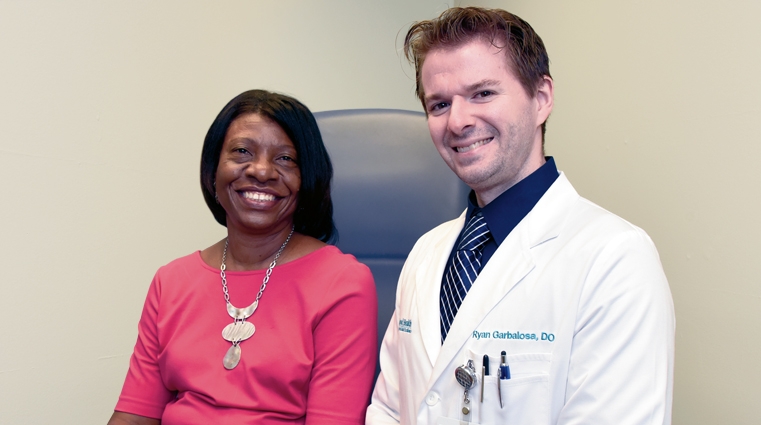 Manning resident Ethel Starks, a wife, mother of three and grandmother of five, has been active all her life. As a 19-year breast cancer survivor, Ethel knows the importance of taking good care of herself and keeping an eye on her health.

But in the summer of 2015, Ethel noticed she felt more fatigued and short of breath with only small amounts of activity. There were other signs as well – weight gain and a cough that would not go away.

She initially blamed the symptoms on soaring summer temperatures, but she knew that there may be more to her worries.

At her next appointment with her primary care physician, Ethel shared her concerns. “With my heart history and my current symptoms, she admitted me to the hospital that same day. That is when I first met McLeod Cardiologist Dr. Ryan Garbalosa with McLeod Cardiology Associates Sumter. After learning about my symptoms, Dr. Garbalosa started ordering tests to check my heart,” said Ethel.

One of the tests ordered by Dr. Garbalosa was an echocardiogram. An echocardiogram uses sound waves to allow physicians to see how the heart moves and pumps blood. This test can show how the heart functions and can detect fluid around the heart. When the test is complete, an “ejection fraction” or “EF” is calculated which is an estimate of how the heart is functioning.

“Normally, this is somewhere around 50 to 70 percent,” explained Dr. Garbalosa. “For Ethel, it was only 13 percent, showing that her heart was very weak. A low ejection fraction, one of the causes of congestive heart failure, occurs when your heart is not working well enough to keep your blood circulating correctly. This was the cause of Ethel’s symptoms.

“A decrease in ejection fraction can be caused by several things,” said Dr. Garbalosa. “The most common causes are not getting enough blood flow to the heart due to a blocked blood vessel or having an uncontrolled blood pressure. However, there are many other reasons such as infections, certain medications, or problems with the electrical signals in the heart.

“Ethel already had some heart problems from a previous heart attack, but it seemed that her symptoms were getting much worse. It got to the point where she could not lay down to sleep or walk across the room without difficulty breathing. It was tough going at first because her symptoms were severe and her heart was so weak, but I told her that I would not give up on her,” added Dr. Garbalosa.

“My heart and lungs had fluid all around them,” Ethel recalled. “I needed medications to remove the excess fluid and strengthen my heart but my blood pressure kept dropping. I was told that if the medications did not work I might need a heart transplant.”

“There are many medications available to treat congestive heart failure,” Dr. Garbalosa said. “Some of them can dramatically improve symptoms and keep our patients out of the hospital and at home doing the things they love. Ethel was given the best and most modern medicine available and after a little time, things started to turn around.”

“I was worried about my health, but even more so about my family,” Ethel stated. “What if my heart stopped while I was sleeping? What about my husband, my children, and my grandchildren? What if I missed my grandchildren growing up?” These worries became her reasons to fight.

One of the reasons that Ethel’s symptoms were so significant was that the electrical signals in the heart were not working properly. Dr. Garbalosa performed an ECG, or electrocardiogram, which indicates the electrical activity of the heart. “It was abnormal and showed that both sides of her heart were not squeezing at the same time. At this point I referred Ethel to McLeod Electrophysiologist Dr. Rajesh Malik,” said Dr. Garbalosa.

Dr. Malik implanted a special kind of pacemaker called a bi-ventricular pacemaker/defibrillator that would pace both sides of Ethel’s heart so they squeezed in unison as well as to prevent her from having an abnormal heart rhythm. After the procedure, Ethel spent the next few days at McLeod Regional Medical Center surrounded by staff that she says joined her in her fight.

For the next year, Ethel was followed closely by Dr. Garbalosa. At first, she saw him every few weeks, then every few months. Each time, Dr. Garbalosa adjusted her medications and made sure she was avoiding salt. Slowly Ethel started walking more and continued increasing her activities. “I felt like I had been given a second chance,” said Ethel.

Today, more than three years after Dr. Garbalosa began assisting Ethel in taking control of her heart health, she remains grateful to him and the McLeod team for helping her regain her quality of life. She says that she is able to do some activities now that she hasn’t done in years, even the small things that many take for granted.

“I can enjoy a family vacation and keep up with my five grandchildren. I’ve also returned to work and I’m able to do more around the house,” Ethel added. “My faith in God, my family, and Dr. Garbalosa are why I’m doing so well.