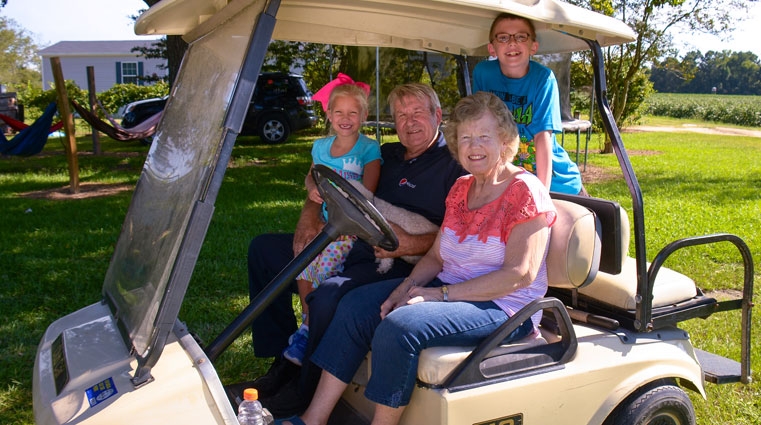 Anne Kirby describes her radiation treatment for a brain tumor as “just a little blip in the road.” Thanks to advanced technology at McLeod and an excellent medical team, the tumor on Anne’s brain was destroyed in only one treatment.

In 2014, Anne suffered from severe back pain as a result of complex spinal issues. Having undergone surgery for this condition previously, Anne returned to Dr. James Brennan, a Neurosurgeon with Florence Neurosurgery and Spine, for treatment. Dr. Brennan determined that Anne needed additional surgery to alleviate her pain.

After a MRI before the procedure, Anne was surprised to hear from Dr. Brennan the day prior to the scheduled surgery. “Because a mass had been found on my kidney, he said he would be unable to perform my surgery. He immediately made an appointment for me to see a urologist the same day.”

After meeting with the urologist and undergoing further testing Anne learned that her left kidney needed to be removed because of the tumor’s size. A month after the kidney procedure, Anne finally underwent surgery for her back condition. Following the two operations, Anne sought the care of McLeod Oncologist Dr. Sreenivas Rao for treatment of the kidney cancer.

“Dr. Rao began running tests before I started on chemotherapy because an earlier scan also revealed there were small spots on my lungs. I had actually volunteered for a cancer research program at McLeod which involved additional detailed tests. That is when the spot on my brain was found.”

Dr. Rao sent Anne to Dr. Brennan to discuss removal of the brain tumor. Dr. Brennan explained to Anne that the tumor could be easily removed with the use of the new state-of-the-art radiation unit at McLeod.

Fortunately for Anne, she had the opportunity to receive the advanced services McLeod provides in its Center for Cancer Treatment and Research. The program includes a newly installed TrueBeam STx linear accelerator, which is specifically designed for the delivery of Stereotactic Radiosurgery (SRS) treatments. These treatments require extreme precision and accuracy to deliver large doses of radiation to the treatment site, reducing the amount of time during treatment and resulting in fewer treatments.

“This non-invasive treatment approach utilizes a set of multiple beams that intersect at a single point on the tumor. The radiation beam hits the tumor with a very high dose of radiation, but gives the brain just a low dose of radiation that it can tolerate. It literally is like taking a knife and cutting these tumors out without having to cut,” explained Dr. Brennan.

McLeod Radiation Oncologist Dr. Rhett Spencer has been treating patients at the hospital for 29 years. “Today, we have four dimensional CT scans and stereotactic MRIs to guide us in our treatment planning. Using these scans, we conform the radiation dose to the tumor target and verify the location and shape of the tumor during treatment. This linear accelerator also rotates in a 360 degree arc around the patient, delivering the radiation beam to any part of the body from virtually any angle. In addition, the treatment table is designed to move in six different directions, and the machine is equipped for image-based adjustments during treatment.”

Prior to treatment, a stereotactic protocol MRI is performed which involves double the contrast traditionally given, allowing the tumor to appear even more enhanced than it would on a conventional MRI.

“This means we are scanning the brain every millimeter not every five millimeters which is the standard with a conventional MRI so five times as many images through the brain are produced. As a result, we frequently find tumors that were not previously seen,” said Dr. Spencer.

Key to stereotactic radiosurgery is the planning required to map out the patient’s treatment. This involves a medical physicist who engineers the treatment plan and radiation dose required to precisely ablate the tumor while minimizing harm to healthy tissue around the lesion. Treatment is scheduled once the radiation oncologist and neurosurgeon approve the plan and ensure that everything is set to match up perfectly when the patient is on the table.

Karen Jones, the McLeod NeuroOncology Nurse Navigator, prepares patients like Anne for the day of treatment. She explains to them what to expect and answers any of their questions. Prior to the procedure, Karen remains with the patient as they are immobilized to keep their head from moving during treatment. This requires either a frame that is bolted to their head with four pins or the application of a special face mask.

“The mask was uncomfortable, but I did not have to be put to sleep or undergo surgery,” said Anne. “I did not feel anything during the procedure. When it was complete they removed the mask and I got up to leave. There was simply nothing to it. I walked out feeling the same way I did when I walked in. When I arrived home I rode around on my golf cart and watched my grandson pick up pine cones like I would on any other day.”

Anne has been among a total of 110 patients treated with intracranial stereotactic radiosurgery by the McLeod Neuro-Oncology Team since October 2014. This includes 13 patients suffering from trigeminal neuralgia, a painful nerve condition that requires the team to radiate a nerve located only four millimeters from the brain stem.

Karen says there are many other successful patient experiences like Anne’s. “Some patients with metastatic lesions that we have treated have other disease processes that affect their overall outcome, but we have achieved good success with the treatment of their brain tumor. For these patients, our goal is not only extension of life but to preserve quality of life.”

McLeod offers the only active linear accelerator (LINAC) based stereotactic radiosurgery program from the midlands to the coast. “The next closest comparable treatment program is the cancer center at Duke in North Carolina,” said Dr. Spencer. The hospital installed a second linear accelerator capable of performing stereotactic body radiation therapy in 2016.

“I am grateful that I did not have to go away to receive my treatment. I literally came down the road from my home to McLeod,” said Anne.

Since her procedure in April 2015, Anne has undergone four MRIs that have all been clear with no evidence of any new tumors.

Today, Anne reports that she is doing well. She married her high school classmate, Gerald Kirby, in July of 2016. The couple reconnected at their 50th high school reunion and are enjoying spending their golden years together.

Anne gives credit for her excellent outcome to God and the extraordinary care and services she receives from her medical team, especially Dr. Rao, Dr. Brennan and Dr. Spencer. She remains under Dr. Rao’s care for the treatment that is keeping the tiny tumors in her lungs from growing. Each day is another victory.