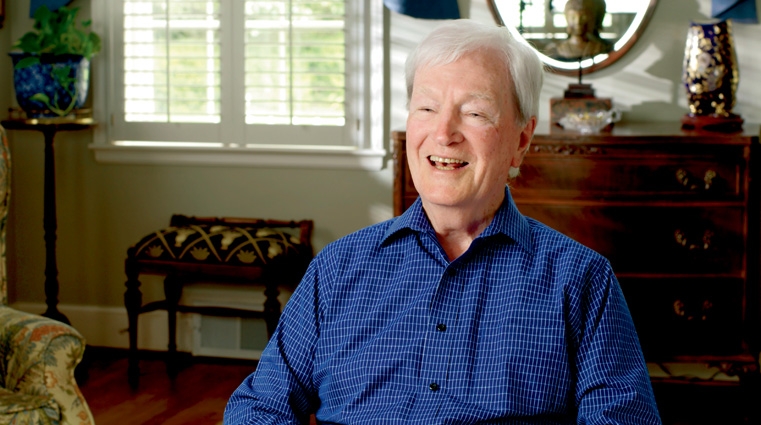 Cancer survivor Harry Moran says he has 17 reasons for living -- the blessing of 17 grandchildren -- that were made possible by the care he received from McLeod Oncologist Dr. Michael Pavy during the last two decades.

Harry has faced the cancer journey twice. His first experience with cancer began with a diagnosis of colon cancer in 1997. He underwent surgery to remove the cancer and began treatment recommended by Dr. Pavy.

“It turned out great because I’m still here,” said Harry. “I suffered the second stage of cancer 21 years later. Both of my lungs were full of cancer.

“In fact, the doctor said ‘I would suggest you start thinking about getting your affairs in order.’ I met with Dr. Pavy within two days and he recommended a course of immunotherapy that included the drug Keytruda.”

Harry explained that he noticed immediate improvement after the second treatment in 2018. He continues to undergo treatment every three weeks at the McLeod Center for Cancer Treatment and Research.

When it comes to cancer care, Harry believes everybody should sit for a time in the waiting room at the McLeod Cancer Center. “All of the people coming in there from young to old and all different economic groups are treated equally. You can see the dedication of each McLeod Cancer Center staff member as they work to ensure every patient receives the help they need during treatment.”

After receiving a letter from Dr. Pavy about the HOPE (Helping Oncology Patients Everyday) Fund, Harry realized how donations to the fund made a difference for all of the patients he would see during his treatments. “My wife and I made a donation and the next day we received another letter from Dr. Pavy explaining how that money was used for a patient who needed assistance with obtaining medicine. I now know that the HOPE Fund is a vehicle for life.”

After beginning his Keytruda treatments for lung cancer, Harry showed Dr. Pavy a picture of what had happened during the 21 years between his first and second diagnosis. “I wanted him to particularly know the life he had given me as part of his treatment. Part of that life besides the wonderful time with my wife of 63 years was 17 grandchildren. I never would have known them if it had not been for his care and treatment of my cancer.”

Harry added that his 17 reasons why (his grandchildren) are the result of the treatment and recovery he received at McLeod. “With cancer you have to recognize there are good and bad parts of it. This journey causes you to start thinking about every day as a day of life -- a new day.”

As Harry continues to receive immunotherapy treatment at McLeod, he likes to share with others how Dr. Pavy and the McLeod Cancer Center have allowed him to enjoy many years of joyful celebrations.