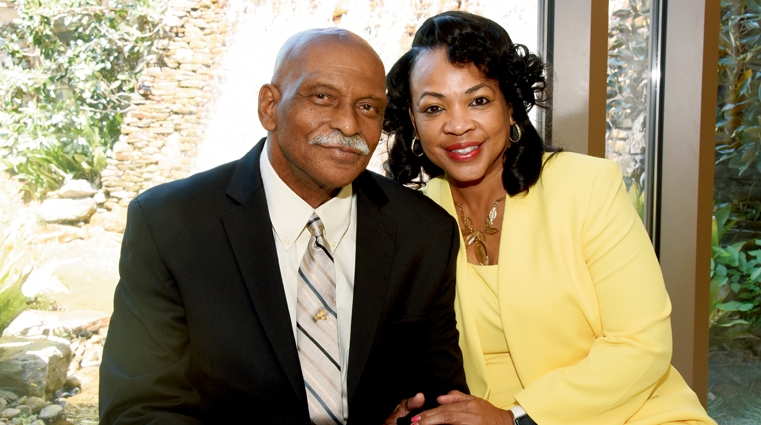 Duane Adams of Sumter, South Carolina says he travels to McLeod Regional Medical Center in Florence because “it is the only place I will go for care.” He also tells family and friends “if you want to live, you better go to McLeod.”

Extremely familiar with the excellent care delivered by the teams at McLeod, Duane’s medical services have included the specialties of spine surgery, pulmonology, thoracic surgery, oncology, neurosurgery and stereotactic radiosurgery.

A smoker all his life, 63-year-old Duane said he suffered for months with colds, sinus infections and a nagging cough that would not go away. In early 2016, Duane’s primary care physician referred him to McLeod Pulmonologist Dr. Vinod Jona for the cough.

After reviewing Duane’s CT scan which indicated a mass in his lung, Dr. Jona performed a fiber-optic bronchoscopy to biopsy cells from the mass. The bronchoscopy procedure allows Dr. Jona to visually exam the breathing passages of the lungs and obtain samples of tissue.

The analysis of the biopsy revealed lung cancer. Dr. Jona shared the diagnosis with Duane and explained that he was a candidate for surgery.

Dr. Huber conducted a lobectomy, removing a lobe of Duane’s lung. Once he recovered from surgery, Duane met with McLeod Oncologist Dr. Rajesh Bajaj to discuss his cancer treatment. The plan involved 19 rounds of chemotherapy and 35 radiation treatments.

“Everyone responsible for my care -- from the physicians to the nurses -- was outstanding. I wanted the best hospital and cancer team and that is what I received at McLeod,” explained Duane.

Two years after completing his cancer treatment, Duane developed severe headaches. He communicated his issues with Dr. Bajaj who ordered a PET (Positron Emission Tomography) scan to detect if the cancer had returned.

Using intraoperative neuronavigation, Dr. Naso performed a craniotomy to remove a portion of bone then under a microscope resected a one inch tumor in Duane’s brain, sparing normal brain structures. To ensure the destruction of the residual cancer cells, Duane returned to McLeod Radiation Oncology for treatment of the surgical area as well as two other small brain lesions.

“The thought of enduring radiation again was not something I wanted to do,” said Duane. “But, Radiation Oncologist Dr. Larry Grubb explained stereotactic radiosurgery (SRS) to me and it sounded much easier and required fewer treatments.”

During stereotactic radiosurgery, the team targets tumors with great precision and accuracy to deliver an ablative dose of radiation, overwhelming all of the abilities of a cancer cell to defend itself.

“We focus the radiation onto the area of disease to completely cover it with the dose necessary to ablate the met,” explains McLeod Chief Medical Physicist Tobin Hyman, MS, DABR.

“This non-invasive, painless treatment utilizes a set of multiple beams that intersect at a single point on the tumor. The beams remain focused on the area as the linear accelerator rotates around the patient’s head.”

Advantages of SRS for patients like Duane include the ability to receive treatment close to home. “A cancer diagnosis is a life changing event for all of our patients,” says Dr. T. Rhett Spencer, McLeod Radiation Oncologist. “Some of these patients are also living with advanced disease. The decision by McLeod to invest in the technology to plan and accurately deliver these types of cancer treatments means patients do not have to leave home to receive the highest level of care.

“At this point in their cancer journey, patients often want to reach certain milestones. They wish to spend quality time with their family and friends. We make that possible by offering these cutting-edge cancer treatment options.”

The most common use of stereotactic radiosurgery involves the treatment of metastatic disease inside the brain. Metastatic disease occurs when the cancer cells break away from where they were first formed, travel through blood or the lymph system, and form new tumors (mets) in other parts of the body such as the brain. The met is the same type of cancer (i.e., lung or breast) but in an area away from the location of the primary disease. Mets develop in the brain, lung, spine and liver.

In early 2019, Duane learned the cancer had returned in his lung. This time, the radiation team used stereotactic ablative radiotherapy (SABR) to treat these mets.

In addition to metastatic disease, the team treats primary cancers such as small lesions in the lung, adrenal gland, prostate and liver using stereotactic ablative radiotherapy. For example, they can treat a non-small cell lung cancer measuring five to seven centimeters. SABR also provides a potential curative treatment option for patients with early stage lung cancer who may not be candidates for surgery because of other medical conditions, such as heart disease.

A few months after his SABR treatment, Duane required stereotactic radiosurgery to obliterate two additional mets in his brain. “I slept during the procedure,” said Duane. “In one short treatment, they targeted those two areas and I was on my way back home.”

Although he is living with metastatic cancer, Duane says, “I feel better than ever. My cancer treatments over the last three years have been successful and allowed me to continue enjoying each day. I look forward to spending more time with my wife Beatrice and our family and friends thanks to God and my medical team at McLeod.”