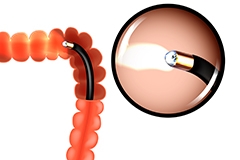 The colon is the four to six feet of the large intestine and an important part of your digestive system. With the broad range of “bad for us” foods we impose on the colon – nachos, pizza, fries, steak, and BBQ to name just a few – it’s no surprise that colon cancer strikes 1 in 18 Americans.

Signs & Symptoms
No single cause of colon cancer has been discovered. But, it appears that people who are most at risk:

Identified early, colon cancer can be successfully treated for a patient’s long-term survival. Many patients have no symptoms, but signs to look for include:

“Colon cancer usually starts as polyps, which can easily be spotted and removed during a colonoscopy,” says McLeod Gastroenterologist  Timothy J. Spurling, MD. “Other tests to detect colon cancer include a digital rectal exam by your personal physician and a blood test that can check your stool for blood that might not be visible to you.”

Treatments
A combination of surgery, radiation and chemotherapy is used to attack the colon cancer tumors, in much the same way that many types of cancer are treated.

Surgery is commonly used to cut out the portion of the colon with the tumors. In cancer’s earliest stages, the two colon sections can be sewn together. This is called a partial bowel resection or partial colectomy. If the two sections cannot be re-attached, surgeons can perform a colostomy, which creates an opening where human waste can be collected in an external bag or pouch. This only occurs if the cancer is near the anus.

Chemotherapy is used after surgery to ensure that all cancer cells were killed and will not return.

Actions You Should Take
If you’re over age 50 or have any of the major risk factors, ask your personal physician about scheduling a colonoscopy with a gastroenterologist.

Many gastroenterologists allow you to schedule your colonoscopy directly without a referral from another physician. Depending on the findings, you may need further tests or an appointment to see a cancer specialist.

Ask your personal physician to refer you to see one of these gastroenterologists.