Brachytherapy: Treating Cancer With Radiation From Inside 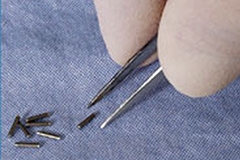 Radiation therapy for cancer  is delivered in two primary forms: External, in which a large x-ray generator sits outside the patient directing beams into the patient and Internal, where the radiation is placed inside the patient mere millimeters from the tumor or directly inside the tumor.

Internal Radiation Therapy is also called Brachytherapy. Roughly translated, it means “short distance therapy” – it’s a short distance between the radiation and the tumor. A small thin tube – called a catheter – is used to deliver radioactive solids to the site of the cancer.  Solids can be capsules, seeds, micro-spheres, or ribbons about the size of a grain of rice.  Other methods of internally delivering radioactive material to the site of the disease/tumor include ingestion of a pill (ex., for thyroid cancer) or injection/infusion through an IV (ex., for bone cancer).

BENEFITS
With internal radiation, physicians can generally use higher doses of radiation than external beam, affecting a smaller area of the body and causing less harm to healthy cells nearby. (More recent forms of external beam radiation, such as Stereotactic Radiosurgery (SRS), can also use stronger radiation and cause less harm nearby than traditional external therapy.)

TYPES
Permanent Brachytherapy means the radioactive elements are inserted and remain in the patient – giving off helpful radiation for weeks or months. They don’t cause discomfort, remain in place, and over time lose their radioactivity.

MOST COMMON USES
Brachytherapy can be used by itself or in conjunction with surgery, chemotherapy or external beam radiation.

It is used to treat a wide range of cancers in men, including prostate; and in women, cervix and breast cancers. Liquids and capsules are used to treat Non-Hodgkin’s lymphoma and thyroid cancers.

TEAM
Since each patient’s general health, type and severity of cancer is unique, a team of professionals uses computer programs to determine the exact amount of radiation and the specific place in the body where it’s to be delivered.  The team includes the patient’s oncologist, a radiation oncologist, a physicist, dosimetrist (dough-SEM-uh-trist) and a radiation therapist, who will work with the patient during the treatments.

FINAL THOUGHTS
While you have a radioactive implant, take care not to be near pregnant women or young children.  Also, the active pellets may set off airport security’s radiation monitor. For patients with permanent brachytherapy, the capsules may set off metal detectors, even after the radiation is expended.  You might want to get a signed note from your doctor if you plan to travel.

Have a question?  Ask a cancer specialist.