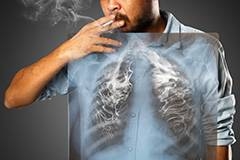 The connection between smoking and lung cancer has long been confirmed. McLeod Medical Oncologist Dr. Karim Tazi explains the importance of stopping smoking if you want to reduce your risk and the lung cancer risks of your family.

In addition, people who live with a smoker have a higher rate of lung cancer than those who live with a nonsmoker. This makes it more important for smokers to think about quitting, both for themselves and for their family members.

Stages of Cancer: What You Need To Know

If You Won’t Quit Smoking, At Least Watch for These Lung Cancer Symptoms

Have a question. Ask a Cancer Specialist.