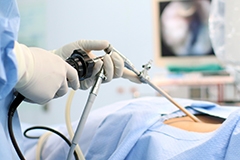 It was more than 2 decades ago that a surgical procedure to remove a woman’s uterus with small incisions was first introduced.  Yet, in 2010 nearly 60% of the hysterectomy surgery in the US were still being performed with long incisions across a woman’s stomach. Although the traditional approach to hysterectomies can be medically required in some cases, most women are excellent candidates for the newer technique.

“The Laparoscopic Supracervical Hysterectomy (LSH) is a technical name for the procedure which involves making a small ¾” incision so that a wand-like implement to clip and remove the uterus,” says McLeod Gynecologist Charles Tatum, MD. “Compared to the traditional method, the LSH is described as minimally invasive and it has a quite a few benefits for the patient.”

PATIENT BENEFITS
Women who undergo an LSH (when compared to a traditional hysterectomy procedure patient) have:

Another important benefit applies to the patient’s family members.  Family members of traditional hysterectomy patients are required to take nearly 5 days off work to care for the patient at home.  With an LSH, that time drops to a just more than 2 days.

This minimally invasive surgery is often used to repair uterine prolapse, when the uterus drops down into a woman’s vagina. Before removing the uterus, a gynecologist may have tried using a pessary (a device to hold the uterus in place) or surgery using ligaments to support the uterus.

OTHER REASONS FOR LSH
It is also used for women suffering from a number of other problems related to their uterus.  These include:

ACTION YOU CAN TAKE
Pain in your pelvic region or a situation, where you can see your uterus in your vagina, are signs of serious medical issues.  The solution may not require surgery but you should see your gynecologist as soon as possible.