Heavy Bleeding During Periods — When to Worry 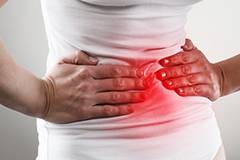 What’s “Normal” and What’s NOT

Generally, a woman’s menstrual period – when her body sheds the uterus lining – lasts 7 days. Bleeding can be captured with pads or tampons.

If the bleeding last more than 7 days and this occurs for several months, you may have a problem that needs medical attention. Other signs of irregularly heavy bleeding:

“Bleeding this heavy is called menorrhagia (men-uh-REEJ-yuh) and may have several causes,” says Gynecologist Dr. Michael Davidson of Advanced Women’s Care. “Heavy periods in teenagers are not uncommon and may settle down in time with or without treatment. They should be evaluated if bothersome, however, since treatments with medications are available.”

Heavy menstrual bleeding can be related to uterus problems, hormones or illnesses.

Your doctor will perform a physical exam, take some blood tests and may do a Pap smear. Based on the results, the following tests might be ordered:

Before you call a doctor, here are some options to try:

Non-surgical treatments that your doctor may recommend to control bleeding and reduce pain include the use of medications – iron supplements, ibuprofen, birth control pills, and intrauterine contraception (IUD). The physician may also prescribe drugs that reduce bleeding by controlling blood clots. One such medicine, tranexamic acid tablets, can cut bleeding by 50%.

With many treatments women can maintain their ability to get pregnant. Ablations result in reduced fertility, and after a hysterectomy, conceiving is impossible.