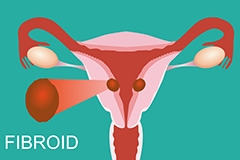 Fibroids, can be painful and are most commonly found in women in their 40s and early 50s.

“Although fibroids are almost always non-cancerous, they can make a woman’s life difficult,” says McLeod Gynecologist Brad Campbell, MD. “They can be as small as a sunflower seed or as large as a softball. It may be only one tumor or many. Over-the-counter medications, such as ibuprofen, helps control mild pain. Low doses of birth control drugs halt the fibroid growth and help control heavy bleeding. And yet, many women require surgery.”

Obviously, removal of the uterus ends the possibility of a woman becoming pregnant.

MYOMECTOMY
For women who want to maintain the possibility of pregnancy, the Myomectomy remains a popular choice. In this procedure, the Gynecologist removes the fibroids, while leaving healthy tissue and the uterus in place. Depending on the size and placement of the fibroids, a minimally invasive (laparoscopic) approach can be used.

Removed fibroids will not regrow. However, new fibroids may grow, requiring additional treatment. Experience shows about a 30% of recurrence of fibroids in 10 years after a myomectomy.

Although a woman retains her uterus with a myomectomy, the procedure can result in some scarring, increasing the difficulty of future pregnancies.

ENDOMETRIAL ABLATION
For patients with smaller fibroids, a Gynecologist removes or destroys the lining of the uterus (endometrium). Laser, heat, microwave or freezing temperatures include the options for implementing the ablation.

While these three procedures are most common treatments for fibroids, several other options exist:

Uterine Artery Embolization (also called Uterine Fibroid Embolization). This treatment, conducted by an interventional radiologist, injects small particles into blood vessels leading to fibroids. This cuts off blood flow to the fibroids, causing them to shrink.

Myolysis involves burning fibroids through a laser pointed directly at a fibroid or inserting a heated needle directly into a fibroid.

ACTION YOU CAN TAKE
If you suffer pelvic pain or heavy bleeding, see your Gynecologist. Fibroids constitute just one of several possible health issues triggering these symptoms.

Lean more by reading these articles: