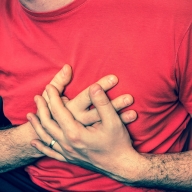 The average age for a man having a heart attack in the United States is 65 so there is no need to worry about heart problems until you reach age 65.

If we were playing a game of “True or False,” the answer to the previous statement would be FALSE.

“It is true that most of the men and women we see with problems that may lead to a heart attack are older,” says McLeod Cardiologist Dr. Dennis Lang. “Yet, ten percent of all heart attacks are suffered by relatively young men.”

For example, award-winning actor James Gandolfini (The Sopranos) was only 52 when he died of a heart attack and actor-comedian John Candy (Uncle Buck) was only 44 when a heart attack claimed him. Between 1994 and 2007, strokes caused by artery blockages jumped 47 percent for men aged 35-44.

RISK FACTORS & CAUSES/EFFECTS
Atherosclerosis, fatty deposits on artery walls, accelerates with a bad diet, obesity, high blood pressure and diabetes. Adding stress and anxiety from today’s world, along with sedentary lifestyles (such as desk jobs, video games) and you have a near-perfect recipe for blockages, heart attacks and stroke.

Standard symptoms apply: chest pain, shortness of breath, nausea and an overall feeling of discomfort. Treatment for the physical component of the attack may not be the end.

Afterward, the man can be left with a feeling that life isn’t as long as he thought and he’s not the man he was – that he’s less able to take care of himself or his family. Literally, a form of PTSD.

All these reasons point to the importance of living a healthier lifestyle, not ignoring the traditional symptoms of an approaching heart attack and looking out for early warning signs, such as low testosterone and erectile dysfunction.

ACTION YOU CAN TAKE
If you’re feeling distress similar to traditional heart attack symptoms, you may want to see a cardiologist for an evaluation. They may suggest a calcium score screening,  which can help determine if you have the beginning of calcium buildup in your arteries.