Wait! Before You Take That Pain Killer, Know the Heart Risks! 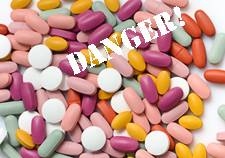 Popular Painkillers Raise Risk of Heart Attack, Stroke…“Ouch?! That muscle hurts!  Wow, my joints ache!” It’s nearly a reflex reaction for many of us to automatically reach for some ibuprofen or similar medication when aches and pains arise.  As we grow older, daily doses tend to become a fact of life.  But we need to be careful.

Recent studies – some involving more than 300,000 people – emphasize the potential danger of a group of medications known as NSAIDS (NonSteroidal Anti-Inflammatory Drugs).  Common medications in this category include ibuprofen (Advil), naproxen (Aleve), and celecoxib (Celebrex).

In 2004, the FDA already banned one drug in the group –Vioxx — because of heart attack risk.

In short, here are the recent study’s findings:

People who’ve already had a heart attack have even greater risk.  Danish researchers report that taking NSAIDs “greatly increases” the risk of a second heart attack for years.  People, who do not take NSAIDs after a heart attack, see a declining risk. In 10 years, their risk of a heart attack is about the same as the general population.

Those most at risk are patients with problems, such as arthritis, who need very high doses (1,800 -2,400 milligrams or 8 -12 regular ibuprofen pills a day).

Taking ibuprofen may affect the cardio protective effect of Aspirin.  If taken together ibuprofen should be taken 30 minutes after or 8 hours before a dose of Aspirin.

Risks are mostly related to people who take high doses over a long period of time.  If you have a muscle sprain and take a normal dose over a few days, it’s not likely to be hazardous.

Among the NSAID medications, naproxen seems to hold a lower heart risk.

Acetaminophen (Tylenol) is a possible option.  However, people with liver disease or alcohol usage have increased risk of side effects from Tylenol.

“These studies show that commonly used pain killers can have powerful side effects,” says McLeod Cardiologist Nathan Almeida, MD.  “Make sure your cardiologist is aware of all medications you are taking and their dosages – especially if you’ve already had a heart attack.”

If you’re not sure about the risks of the medications you’re taking or think you may have a heart condition, check with your personal physician or a cardiologist.