Vaping: What Our Medical Specialists Say 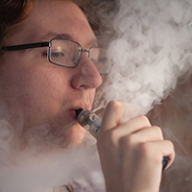 As of October 29, 2019, the CDC confirms 37 deaths among 1,888 lung injuries related to e-cigarettes or vaping. The cases space every state (except Alaska) the District of Columbia and one U.S. Territory, with numerous cases reported in South and North Carolinas. Almost 80% of the injuries occurred in patients under the age of 35.

What is causing this outbreak?
For years now, e-cigarettes have been viewed as a safer alternative to smoking. However, along with these illnesses and deaths, the latest research tells us that vaping products contain THC, the main psychoactive ingredient of marijuana. In particular, products obtained off the street have played a major role in this outbreak.

Now, many of our patients are asking, “Should I go back go smoking cigarettes?”  Here’s what we know so far and what we advise.

The Background
The FDA began regulating e-cigarettes in 2016, including the marketing of products to help people quit smoking.  Since 2018, all e-cigarettes are labeled with the important warning that these products all contain nicotine – the same addictive chemical in tobacco. Most people would be surprised to know that the manufacturers often set the “dose” of nicotine in vaping products to levels that get users hooked faster, sooner.

We know vaping can be an important off-ramp for tobacco smokers. However for now, there just isn’t enough data to support the acclaim that vaping products are safe for long-term use.

Selling e-cigarettes to people under the age of 18 is illegal. Until recently, many websites selling these products have not performed rigorous age verification. Many brick-and-mortar stores are also lax about verifying the age of vaping customers. And some minors get the products from older youth.

Our Recommendations
First, we advise that the production and sale of vaping products with THC should be halted.

Second, we encourage adult users to speak with their physicians and look for ways to wean off vaping.

Third, for youth and adults, we have crystal clear advice: If you  haven’t vaped yet, don’t. And if you do vape, stop now!  For youth, vaping is the on-ramp to a lifetime of nicotine and smoking. Almost 40% of high school seniors and, more stunning, 20% of 8thgraders, reported vaping in the preceding 12 months. One in 3 teens will make the transition to tobacco cigarettes six months in.  Sadly, we know what will come next for this generation of new smokers.

As physicians in the community and for our community, we are taking a stand now. We will work to treat smoking-related illnesses of our current patients and double-down on efforts to inform our patients, friends and neighbors to prevent a new generation of health problems.