A Twist of the Wrist. Not So Easy with Carpal Tunnel Syndrome 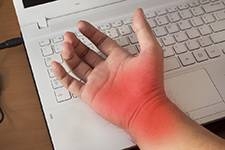 The quarterly report was nearly finished… when they hit Margaret. Pins and needles in her hand. A dull ache in her arm. “It’s not as bad as last night,”  she thought. “But it really hurts.” Margaret struggles with pain from Carpal Tunnel Syndrome (CTS) – a problem with the wrist that’s three times more likely to trouble women than men. “In the wrist, there is a small tunnel with the carpal bones forming the bottom and sides,” says McLeod Orthopedic Specialist Dr. David Lukowski, M.D. “Tendons and nerves run through the tunnel. And the top is covered with connective tissue called a ligament. The tendons can swell when irritated, squeezing the nerves. The result is Carpal Tunnel Syndrome.”

MORE ABOUT THE SYMPTOMS

Margaret’s pain is described by others as a burning or itching. Numbness in the hand and fingers. At its worst, CTS leaves the thumb weak or makes bending the fingers and grasping difficult.

ARE YOU LIKELY TO FEEL THE PAIN?

Carpal Tunnel Syndrome is often associated with the repetitive motion of using a computer keyboard. However, it is also related to repeat motions in manufacturing, cleaning and meatpacking.

Diabetes, menopause, obesity, a thyroid condition or cracked or broken bones in the wrist can also trigger CTS. As with many health issues, a family history of carpal tunnel problems means an increased risk for you.

Nearly half of pregnant women suffer CTS. This pain is likely to subside a few months after the baby’s birth.

Not pregnant? Then, other treatments may be needed.

When It’s Time For Surgery

Failure of conservative treatments leads to a surgical carpal tunnel release – one of the most common procedures in the U.S.

The procedure can be handled with open surgery using a 2-inch incision in the wrist. The surgeon cuts the carpal ligament, making the “tunnel” larger and releasing pressure on the nerves.

An endoscopic, minimally invasive approach aids faster recovery and less postoperative pain. One or two small incisions allow the surgeon to use a camera and thin catheter for the operation.

Immediately after the surgery, symptoms subside. A wrist brace may be required for 2 or 3 weeks. Your palm will experience minor soreness for several months. And it may take up to 6 months to regain strength in your grip.