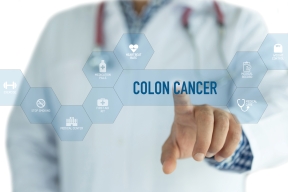 The colon is the four to six feet of the large intestine and an important part of your digestive system. With the broad range of “bad for us” foods we impose on the colon – nachos, pizza, fries, steak, and BBQ to name just a few – it’s no surprise that colon cancer strikes 1 in 18 Americans.

Considered a silent disease, most of the time there are no symptoms with colon cancer. The symptoms that people may experience include a change in bowel habits, abdominal pain, blood in the stool, and weight loss. If individuals have these symptoms, the disease may already have advanced.

No single cause of colon cancer has been discovered. However, it appears that those who may be at most at risk:

Identified early, colon cancer can be successfully treated for a patient’s long-term survival. Many patients have no symptoms, but signs to look for include:

Screening Colonoscopy
The gold standard for the diagnosis of colon cancer is colonoscopy. To prevent colon cancer, individuals should have a colonoscopy on a regular basis. While colonoscopy is not a test most people look forward to undergoing, it is one of the few diagnostic procedures known to save lives.

Colon cancer usually starts as polyps. Using colonoscopy, we look for polyps, which are small growths that can develop into cancer over time. If we can remove polyps before they have a chance to develop into colon cancer, we are preventing colon cancer.

In about 60 to 70 percent of patients, we find no polyps. In 30 to 40 percent, we do find polyps. Most of the time, the polyps are small and can be removed during the actual colonoscopy.

Once a person develops colon cancer, they may require additional surgery. Ten to 20 percent of the time when we diagnose a patient, they already have advanced cancer. At this point, they may need further treatment with surgery, chemotherapy or radiation.

Treatments
A combination of surgery, radiation and chemotherapy is used to attack the colon cancer tumors, in much the same way that many types of cancer are treated.

Actions You Should Take

If you are age 45 or older or have any of the major risk factors, ask your personal physician about scheduling a colonoscopy with a gastroenterologist.

Many gastroenterologists allow you to schedule your colonoscopy directly without a referral from another physician. Depending on the findings, you may need further tests or an appointment to see a cancer specialist.

Find a gastroenterologist in your area.