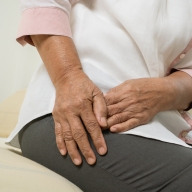 From an interview with
Dr. Chad Thurman
McLeod Orthopaedics Florence/Hartsville

With anterior hip replacement, we move the incision from its traditional position on the side of the hip toward the front of the pelvis. This allows us to make a smaller incision with a muscle-sparing approach that doesn’t require us to peel any muscle off the bone, such as in the traditional approaches. The other added benefit is we’re able to use x-ray and navigation technology to make sure we get leg lengths and restore hip centers appropriately.

We still have to go in the hip, and it’s still an incision. “Minimally-invasive” is actually a fairly vague term, but generally, the idea would be to use an incision that is smaller than a traditional one, either two-thirds or half the size. The key element is avoiding as much soft tissue damage as possible.

Another benefit of the anterior approach versus the traditional posterior approach is that studies have shown less postoperative pain, a little bit less physical therapy and a quicker return to normal function. Hip replacement surgery still represents a significant undertaking, but patients will most likely have less pain and return to normal sooner.

At McLeod, a good percentage of our anterior hip candidates go home the same day. That includes an eight-hour stay in the hospital. But you’re going home, you’re sleeping in your own bed and you’re eating dinner at home. You’re with your family, and you’re not staying overnight in the hospital if we can avoid it.

The best candidates for any hip replacement, but especially anterior, are people who are active but are now having pain in their hip region that is limiting their ability to live a normal life. They’ve had to give up golf, playing with their grandkids or gardening. They seek a return to a high quality of life but have been set back by the pain.

We’re seeing more and more young people getting both hip and knee replacement. Arthritis is still generally a disease of folks in the later years of life, but we’re seeing people as young as their 30s and 40s who are coming in with genetic conditions or traumatic conditions that require hip replacement. That’s where the anterior approach can help them get back faster to a more normal life that will last for a long time.