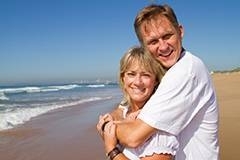 “My whole life has been about changing negatives into positives.”

Although there is still no cure for cancer, today’s treatments are proving more effective. According to the American Cancer Society, the U.S. death rate from cancer has fallen 20% from 1991-2009. Since 1991, death rates have also dropped 30% for breast cancer in women and lung cancer in men.

Early detection of cancer, more accurate diagnoses, more effective treatments and better follow up care are the primary reasons for the growing number of survivors.  For women who are diagnosed early with Stage I (small tumor) breast cancer, the survival rate is nearly 100%.

“Some places offer special programs, which are designed to help the survivor rebuild their physical health, while offering social and emotional support that is often overlooked,” says Senior Occupational Therapist Ashley Atkinson.

So, the good news is that as a cancer survivor, you may have a long, active, fulfilling life.  Despite the positive outlook for physical health, cancer survivors do face emotional pitfalls.

Studies have shown that the fear of recurrence, often triggered by unexplained pain, can cause debilitating fear and anxiety.  About 1/3 of cancer survivors reported this problem. In its worst form, a person suffers emotional paralysis — unable to commit to getting married, changing jobs or moving to another city.

Nearly 20% of cancer survivors experience what could be described as Post-Traumatic Stress Disorder (PTSD).  Also in a similarity to soldiers, some survivors suffer “survivor’s guilt.”  Guilty for still living, while their comrades – in this case — members of their cancer support group – didn’t make it.

FINAL THOUGHT.
If – as it seems – surviving cancer is to become the new normal, then survivors, their families and medical professionals need to find psychological support for these expected issues. It could be a special support group for survivors and their spouses.  Or it might be professional counseling.  Or simply a “girls’ night out” for a handful of cancer survivors to share their feelings.