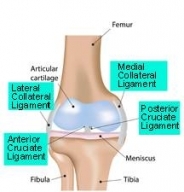 Does your knee hurt?  It could be a bad joint that’s calling out for replacement.  Or it might be a stretched or sprained ligament.

Before we discuss injuries and treatments, let’s take a quick course in “knee ligament basics.” (Refer to the image with this article to better understand the importance of knee ligaments.)

“Ligaments help connect bones to other bones,” says Adam Ploeg, Certified Athletic Trainer with McLeod Sports Medicine.  “In the knee, there are 4 ligaments that help to stabilize the knee and connect the portion of the leg above the knee (thigh) to the leg below the knee. These ligaments can sometimes look like a bundle or intertwined rope and vary from the thickness of a pencil to a thickness of 3 fingers.”

Two are inside the knee: anterior (front) and posterior (back) cruciate ligament. They form an “X”.

Two are on the sides of the knee: lateral and medial collateral ligaments.  They help brace the knee against unexpected motions, while helping control the sideways motion of the knee.

Not all injuries are serious.  Tendonitis, for instance, is an inflammation of a tendon or ligament. Treatment with ice, over the counter medications (aspirin, ibuprofen), and rest can often get the person back in action.

The Anterior Cruciate Ligament (ACL) is one we most commonly hear about.  Athletes, especially young females, are more susceptible and can tear this ligament with a quick change of direction or sudden stop on the playing field, however no population is eliminated from risk.

The Posterior Cruciate Ligament (PCL) is wider and stronger than the ACL.  Generally, the knee must be hit from the front – a direct impact such as landing directly on the front of the knee or an automobile accident – to injure the PCL.

Medial Collateral Ligament (MCL) is the most frequently injured of the four ligaments.  A direct blow to the outside of the knee during contact sports, such as soccer or football, can trigger a sprain or tearing of the MCL.

Injuries to the Lateral Collateral Ligament (LCL) are less frequent.  A blow to the inner side of a knee can cause this injury.

Most injuries to the knee ligaments are sprains. TREAT them with Rest, Ice, Compression and Elevation along with over-the-counter medications (except aspirin which can increase bleeding).

For 72 hours after the sprain, you should AVOID Heat (which might encourage inflammation), Alcoholic Drinks (which can increase bleeding), Running (obviously) and Massage (which could increase swelling).

A tear or injuries to more than one ligament simultaneously may require SURGERY. The best way to find out is to visit an Orthopedic Specialist.  A thorough exam is likely to include some X-rays to see the bones and knee joint, along with an MRI to show ligament damage.