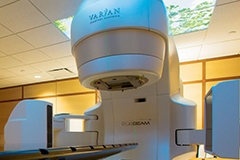 Radiotherapy Improves Its Aim
In the late 20th century, technology advancements led to better-focused beams of radiation. Treatments involved a radiation oncologist, a neurosurgeon and even a physicist to calculate the appropriate radiation dosage.

In the 21st century, cancer patients now have available “Stereotactic RadioSurgery” also know as SRS. Aside from the technical jargon, SRS basically uses computers and digital imaging to deliver large doses of radiation in small places with extreme accuracy. Three-dimensional digital imaging (CT, MRI or PET scan) is used to identify even the smallest tumors.

“Systems, called frames, can be used to immobilize a patient, providing us with a very stable and reproducible area to target,” says McLeod Chief Medical Physicist Tobin Hyman. “However, some newer technology allows SRS treatments to be undertaken without the frame, increasing patient comfort without compromising precision and accuracy.”

No Cutting in this Cutting-Edge Surgery
Although the term “surgery” is part of the procedure’s name, there is no physical incision. The ability to use an extremely focused radiation beam (or sometimes multiple beams) not only delivers a higher dose of radiation, but also results in fewer actual treatments and shorter sessions.

“Using SRS we can target and treat a site only four millimeters (the size of a pencil eraser) from the brain stem,” says Neurosurgeon James Brennan of Florence Neurosurgery and Spine.

Fewer Radiation Side Effects
Common side effects from regular external beam radiation treatments to the brain include hair loss, reddening of the skin and a general feeling of illness. Since SRS is more accurate and targeted, normal brain tissues are not hit with much radiation. Physical side effects are minimized. And the risk of memory loss — often experienced when wide areas of the brain are eradiated — are minimized with SRS.

Fractions and SRS
Radiation therapy plans include calculating what total dose of radiation will be required to successfully treat the tumor.  Then the total is broken into small doses (fractions), because delivering all the radiation in a single dose might do more harm than good.

SRS and SBRT’s ability to offer more focused doses that can track the miniscule movement of a tumor results in 2 patient benefits: 1) Higher doses of radiation can be delivered in a single treatment and 2) the number of needed treatments or fractions can be reduced to a mere handful for the disease sites where SRS or SBRT is indicated.

Have a question? Ask a cancer specialist.