Special “Moments” from the Birth of Evan Paul Parisi 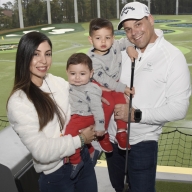 “We researched the coastal area and chose Little River for safety, convenience and healthcare. With Gaby being pregnant at the time, we felt good knowing that McLeod offered great doctors nearby.” — Eddie Parisi, Operations Manager Topgolf, Horry County

On April 4, 2019, at 7:51 p.m., Evan Paul Parisi made his entrance into the world at McLeod Health Loris. He weighed six pounds, eight ounces and measured 19 inches long.

But there was much that preceded this – four special moments to be specific. Eddie Parisi and his wife Gaby moved to Little River as Eddie became the Operations Manager of the new attraction, Topgolf. Gaby selected Dr. Chris McCauley of McLeod OB/GYN Seacoast as their doctor. His practice has offices in Carolina Forest, Little River and Loris, where he delivers.

Moment #1 THE TOUR
Dr. McCauley suggested a tour of the McLeod Health Loris Women’s Services and, as the Parisi’s looked for the hospital’s elevator, a “nice young man” took the couple to Labor & Delivery Floor and showed them around.  Their tour guide turned out to be the hospital administrator, Scott Montgomery.

After her 37-week visit, where Dr. McCauley told Gaby that she was dilated 2.5 centimeters, she went home for a nap. Awakened from her nap by sharp belly pains, the pains became increasingly worse.

Moment #2 THE BABY’S CAR SEAT
She called Eddie and told him the baby would be arriving soon. Arriving home in his truck, he picked up Gaby – but then realized the baby’s car seat had not been installed.

“At this point, the situation had become a comedy routine,” recalled Eddie. “I ran inside, grabbed the car seat and installed it, all while Gaby screamed at me to hurry up.”

Eddie quickly drove to McLeod Health Loris and pulled up to the Emergency Department. He rushed Gaby inside, and the nurse took her up to Labor and Delivery for an assessment.

Moment #3 A BIT OF SPANISH
Nurses and staff tried to keep Gaby calm, but with English as her second language, the medical terminology was a problem. Fortunately, attending physician Dr. Joycelyn Schindler of McLeod OB/GYN Seacoast spoke Spanish.

“Gaby immediately relaxed once I came into the room,” said Dr. Schindler. “Since I’m bilingual, I offered reassurance and kept her focused on the baby.”

Moment #4 THE HAPPY ENDING
As an extra precaution, Gaby remained in the hospital overnight and went home the next day, driven by Eddie with the child car seat firmly installed and occupied by Evan Paul.

ACTION YOU CAN TAKE
Find an OB/GYN near you.