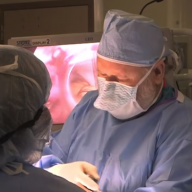 From a story in McLeod Magazine by Jessica Wall with
Dr. Michael Davidson, McLeod GYN Specialists

“Hearing that I could resume normal activities and return to work within two weeks instead of the traditional six weeks sounded wonderful.” — Dawn Wallace

“With robotic-assisted surgery, I feel that I am impacting my patient’s life much less than I would have eight to ten years ago because now I can do the surgery in a way that allows my patient to return to work sooner with less pain and disruption,” says McLeod Gynecologist Dr. Michel Davidson.

Dr. Davidson points to the case of 40-year-old Dawn Wallace, who was experiencing irregular, unpredictable menstrual bleeding, something she had not experienced since an endometrial ablation 20 years earlier.

An exam revealed that a cyst on Dawn’s ovary was the most likely culprit. However, she also had fibroids and adenomyosis, where the inner lining of the uterus (the endometrium) grows into the muscular wall of the uterus. Additionally, an ultrasound showed cervical stenosis, a narrowing of the passageway through the cervix that can result from an endometrial ablation.

“Once you have cervical stenosis and an ablation, a hysterectomy is the only treatment option,” explains Dr. Davidson.

“If we did not have the capability to perform robotic surgery, Dawn would have required a fairly large incision, considering she had fibroids,” explains Dr. Davidson.

“Approximately 90-95% of patients who undergo robotic-assisted procedures go home the same day,” says Dr. Davidson. “Using other approaches, the average is a two- or three-day hospital stay. Nearly all of my surgeries are robotic-assisted. When we look at the data – infection rates, outcomes, etc. – we are doing patients a favor with robotic surgery. Patients get back to normal faster and experience a much lesser impact on their home and work lives.

“It was the easiest thing I have ever done,” says Dawn, describing her experience as a “walk in the park” with only mild stomach soreness immediately after the procedure. She never even needed pain medicine.

ACTION YOU CAN TAKE
Read the entire article on page 30, McLeod Magazine.

Find a Gynecologist who performs Robotic-Assisted Surgery near you.