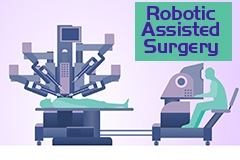 Surgery, in its broadest terms, goes back thousands of years. Yet, it wasn’t until the 20th century that many of the advances we know today were introduced. In 1981, the first minimally invasive (laparoscopic) appendectomy was performed. Before long, many surgeons were moving from “open” surgery using incisions that were over a foot long to “minimally invasive” surgery where incisions were measured in mere inches or a few centimeters. By the 1990s, laparoscopic surgery was a regular option for patients.

At the dawn of the 21st century, the U.S. Food & Drug Administration approved the use of robotically assisted surgery, involving two consoles – one with the instruments for the patient and another, where the surgeon performs the surgery with 3-D vision and magnification

“The surgeon controls everything, every aspect, the camera, the instruments,” adds Dr. Sonfield. “The robot is an advance, a new tool. It offers better definition of view and more control with the wristed instruments than with the standard laparoscopic sticks.”

Dr. Sonfield and other general surgeons can use the robot in surgeries, such as gall bladder removal, hernia repair or colon surgery.

“There’s a big difference between standard colon operations performed 20 years ago and today’s laparoscopic and robotically assisted surgery,” says Dr. Sonfield. “In the case of a hernia, traditional surgery would make a 15-inch incision, cutting muscles and resulting in painful healing.

“The robot allows us to approach from the abdominal side instead of the groin. We use incisions that are 2-inches versus 15-inches. It’s a similar to what would be done in ‘open surgery.’ It’s just now that we’re using new and better tools to do it.

“The result is a much better repair with less pain and a quicker recovery.”

Find a general surgeon near you.

Find a surgeon near you that performs robotically-assisted surgery.