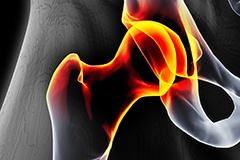 “Total Hip Joint Replacement  remains one of the most common and most successful Orthopedic approaches for people with hip problems,” says McLeod Orthopedic Surgeon Dr. Michael Sutton of McLeod Orthopaedics Dillon.  “Your surgeon replaces the injured or arthritic top of the leg (femur) with a stem and ball.  A cup is set into the hip to complete the cup-and-ball joint.”

Another lesser known, but occasionally discussed, repair for a bad hip is called resurfacing.  In this procedure, a cup section is still set into the hip.  However, rather than sawing off the top of the femur and replacing it with a metal stem and ball, the top of the leg bone is resurfaced and a cap is placed over it.

Surgeons who support resurfacing say that it is good for younger people with a bad hip, because a younger person may wear out the replaced or resurfaced joint.  And, proponents say, a resurfaced joint is easier to revise.

Another claim says there is less risk of a hip dislocation if it has only been resurfaced and not totally replaced. Supporters of replacement claim that dislocations are rare in either method.

There are a number of generally accepted drawbacks to resurfacing:

A European study of 434,650 hip operations between 2003 and 2011 produced definitive findings against resurfacing:

Hip Resurfacing does have its advocates.  However, only a limited number of people are ideally suited for resurfacing.

A consultation with one or more Orthopedic Specialists should help answer questions about your particular situation.