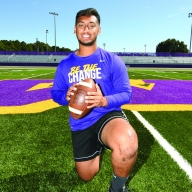 “I would not have the opportunity to continue my kicking career without my incredible care team.” — Vraj Patel, McLeod Orthopaedics patient

Vraj Patel had a busy senior year at Wilson High School in Florence, playing both football and soccer. Early in 2021 during a soccer practice, Patel was running down the field, made a turn, felt a pop and was on the ground instantly.

“I tried to stand, but I could not balance on my leg,” said Vraj. “I could not even extend it at all.”

McLeod Sports Medicine Athletic Trainer Shalik Brown rushed to his side, assessing him and performing a series of on-field tests to determine the extent of the injury. Following an MRI and evaluation by McLeod Sports Medicine Specialist Dr. Art Jordan, Vraj was referred to McLeod Orthopaedics Surgeon Dr. Zachary DiPaolo.

Due  to the severity and complexity of his injury, Dr. DiPaolo proceeded with a two-stage repair. First, he repaired the tears of the knee’s rubbery cartilage (the meniscus). Vraj then underwent 10 weeks of physical therapy to regain knee range of motion and strength. Then several months later, he returned to the operating room to reconstruct his ACL. After both surgeries, Vraj completed rehabilitation at McLeod Outpatient Rehabilitation and Sports Medicine.

In the spring, Vraj signed with Catawba College to be the kicker for their NCAA Division II football team. As a result of his injury and surgeries, Vraj decided to medically redshirt with the Catawba College football team for his freshman year, preserving a year of athletic eligibility while he is recovering from his injury.

“Dr. DiPaolo knew I was interested in the medical field, so he let me spend the summer shadowing him in the clinic and in surgeries. I had a blast and learned so much from him. Hearing Dr. DiPaolo talk to patients has taught me so much about shoulders and knees — more  than I learned even from my own knee surgeries. Dr. DiPaolo is more than a great doctor — he is a great teacher and  a great person,” adds Vraj.