Nocturia, Nighttime Urge to Urinate, Can Make You More Than Grumpy 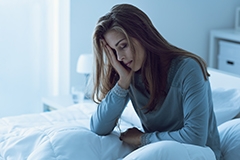 Need to get up once a night to go to the bathroom? Don’t worry. That’s normal.

“The symptoms of this problem are simple to spot – going to the bathroom too much at night,” says McLeod Gynecologist Brad Campbell, MD. “But your physician may look in several directions to diagnose the actual cause of the problem.”

Fluid Intake. What, when and how much we drink can affect our body’s need to urinate. Caffeine and alcohol are likely triggers, especially when consumed in the evening or just before bed. Try drinking enough fluids during the day to stay hydrated but limit fluids between dinner and bedtime.

Hysterectomy. Removal of a woman’s uterus (occasionally along with ovaries and fallopian tubes) can also lead to some incontinence during the day, as well as at night.

Aging brings with it a relaxation of those muscles that control the bladder, leading to a need to urinate more frequently.

Diabetes causes excess sugar in the blood to spill into urine along with water.

Heart Failure can be accompanied by edema, excess fluid collecting in the body’s tissues, which must then be eliminated. Elevating your legs or compression stockings can help control the fluid buildups.

Neurological Diseases, such as Parkinson’s or Multiple Sclerosis, can affect the nerves that control the body’s urinary functions.

NOT ALWAYS SOMETHING ELSE
Nocturia can be, but is not always, a sign of a more serious problem. In fact, about 40% of women in that recent survey had no other urinary symptoms. One researcher said nocturia is “increasingly being recognized as a condition unto itself.”

ACTION TO TAKE
If you’re having a problem with too many nighttime trips to the bathroom, start keeping a diary to record your bathroom habits for a week. Then, schedule an appointment with your Gynecologist to review your diary and run some simple tests.