Too Much Mammography? No!! 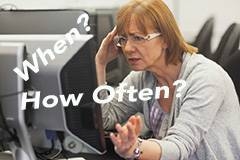 An American Response to the Recent Canadian Study

In early February 2014, the Canadian National Breast Cancer Study published an article in the British Medical Journal, essentially saying, “Long-term follow-up does not support (mammogram) screening in women under 60.”

The finding flies in the face of standing American practice of recommending annual mammograms for women starting at 40. A firestorm has ensued, similar to the one following a 2009 report by the United States Preventive Services Task Force, which said annual screening mammograms should start at age 50, not 40.

The American College of Radiology (ACR) and Society of Breast Imaging responded to the Canadian study saying, “Early detection via mammography is clearly the major reason for the decrease in deaths in the U.S.”

ACR also called the report ”an incredibly misleading analysis based on a deeply flawed” study.

The American College of Obstetricians & Gynecologists said it “maintains its recommendation that mammography screening be offered annually to women beginning at age 40.”

The American Cancer Society responded to the study, restating its recommendation of annual screening mammograms for women starting at age 40.

The Canadian breast cancer study represents a common occurrence these days.  A single medical study on a disease or cure garners significant attention.  It goes viral on the Internet.  And confusion spreads among patients.

When this happens it’s always best to 1) look for the response of respected national health organizations and 2) feel free to ask the physician you trust with your personal health about his or her recommendation.