Keep An Eye on the Man In Your Life: Men Have More Heart Attacks Than Women 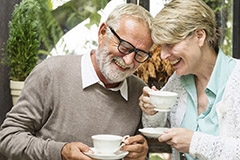 Statistics tell us that one in every four male deaths is from heart disease. Of all sudden cardiac events, 70% to 90% occur to men. These statistics present a straightforward picture of the great risk men face of heart attack. What remains to be seen is WHY men have more heart attacks than women.

“Heart attacks strike both men and women and stand as the leading cause of death for both genders,” says McLeod Cardiologist Anil Om, MD. “For years, the gap between heart attacks in men and women was attributed to men working in more stressful situations. Yet, as women established a greater role in the workplace, the gap, though narrower, has remained.”

Researchers around the world continue to seek the reason for this difference. Many explanations have been proposed but no definitive answer as yet exists.

Cautionary Note. More research clearly needs to be undertaken to confirm these suspected reasons or uncover others. Until then, men should understand that they face increased chances of a heart attack.

To reduce your threat of heart attack, control those risks, which you can manage. Lose weight. Eat a better diet. Exercise regularly. And limit your alcohol consumption.

If you are concerned about your heart’s condition, see a cardiologist.