Is Bleeding During Pregnancy Dangerous? 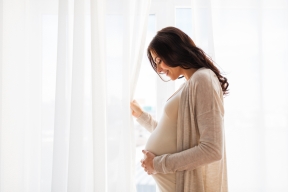 Approximately one in four pregnant women may experience some bleeding during the different phases of her pregnancy. McLeod OB/GYN Dr. Gary Emerson provides an overview of possible causes for this occurrence.

“Bleeding is especially common during the first 3 months (trimester) of pregnancy,” says McLeod OB/GYN Dr. Gary Emerson. “In many cases, the woman experiences only spotting, a small amount of blood from pink to dark brown. Spotting is different from bleeding, which would require a pad or tampon to stop the blood.”

During the first trimester, the bleeding most likely can be caused by:

During the second trimester (months 4 through 6 of the pregnancy), a cervical exam or intercourse may cause irritation that leads to bleeding. Another common cause could be non-cancerous growths, such as cervical polyps, which usually don’t cause serious problems.

Minor bleeding during your second trimester is not unusual, but you should be checked by your OB/GYN.

In the final 3 months of pregnancy, the expectant mother may again experience light bleeding after a cervical exam or intercourse.

If you have any doubts about bleeding during pregnancy, contact your OB/GYN to discuss.