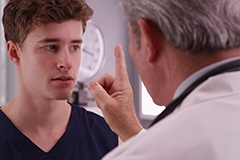 Next to Highway crashes, sports participation is the leading cause of traumatic brain injury, primarily concussions, among young people aged 15-24. Parents, coaches and orthopedic specialists are joining the media in paying closer attention to the effects of concussion.

“Concussions are a scenario that we’re just starting to appreciate and recognize,” says Primary Care Sports Medicine Specialist Chadley Runyan, MD. “As we learn more about the disease process, we’re adjusting and tailoring the way we treat it. As our knowledge base improves, our treatment of concussions can improve.”

ImPACT Testing
The majority of high school and college sports concussions are caused by the impact of players colliding with each other.

“A big part of the brain’s job is to remember and process information,” says Dr. Runyan. “So, we use a computer-based neurocognitive test to help diagnose brain injury. When possible, we test athletes before each season with the same computer program the NFL, NHL, and NCAA players use.”

“As a result, we have a preseason baseline test for an athlete accomplishing those tasks. If they show up later in the season with the symptoms of a concussion, we have them take the test again. We can then compare their preseason baseline and where they are now. You can also use the test to determine if the athlete has recovered completely and returned to their baseline function. It’s not the only thing we use in terms of assessment and returning an athlete to play and competition, but it is an important piece of the puzzle.”

MULTIPLE CONCUSSIONS
Although a single concussion should concern athletes, many suffer more than one.

“We’re seeing the problem of multiple concussions in the older, retired generation of NFL football players,” says Dr. Runyan. “In some ways it’s not completely new if you look at boxing over the years. There used to be a diagnosis called dementia pugilistica, dementia from boxing. We’re finding that there may not be too much difference from that and what NFL players are experiencing during their careers.”

Yet, according to Dr. Runyan, “We just don’t know the full answer to the question of consequences for multiple concussions. Certainly, there is a suggestion that there is a cumulative effect of concussions over time and that more concussion does equal worse outcome or long-term problems neurologically.”

WHAT WE CAN DO
Everyone has a role in reducing the danger and incidence of concussions in school sports.

Find a Sports Medicine Orthopedic Specialist near you.