If You’re Pregnant, Eat Fish But NOT All, Says the FDA and EPA 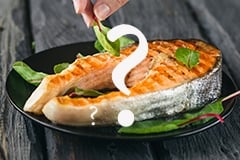 “In January 2017, the Food & Drug Administration and the Environmental Protection Agency updated guidance they earlier issued on fish consumption for three groups of women,” says McLeod OB/GYN Merritt King, MD. “The new guidelines are more specific and apply to women, who are pregnant, breast-feeding or of childbearing age (16 to 49).”

About half of pregnant women eat only 2 ounces of fish a week, 50% of the recommended weekly amount.

The primary difference in the new guidelines is the specificity the oversight agencies apply to which fish are preferable. All fish supplies protein, vitamins (A, B, and D) and other minerals needed by the body, such as selenium, zinc, iodine and iron. However, fish can also end up absorbing mercury, a toxin known to impair fetal development.

Best Choices (eat 2 to 3 servings a week) include nearly 90% of fish eaten in the U.S., such as shrimp, salmon, tilapia, canned white tuna, catfish and cod.

Even cooked, there is no way to prepare fish to avoid high levels of mercury because the metal is found throughout the tissues of the fish.

Consumer Reports takes a more conservative approach than the FDA and EPA, recommending pregnant women avoid all tuna, even canned tuna, which they claim, “can be quite high in mercury.”

WHAT IS A SERVING?
For the normal adult, a typical serving of fish is about 4 ounces (before cooking), approximately the size and thickness of the palm of your hand.

SUPPLEMENTS RATHER THAN FISH?
Taking an Omega-3 supplement is helpful. However, it won’t furnish your body everything that’s gained from regularly eating fish in the “Best” and “Good Choice” categories.