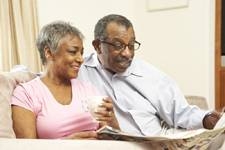 One half of African-American women will die of heart disease or stroke.

When evaluating a person’s risk of heart disease, you will find a number of elements that can be changed or improved: weight, exercise, and diet, for instance. What you can’t change is your genetic heritage. “When it comes to heart disease and African-Americans, the good news is hard to find – especially in South Carolina,” says McLeod Cardiologist Anil Om, MD. “Yet, the information in this article should serve as a warning for African-American men and women to monitor their hearts and reduce risks, if possible.”

Heart disease — the organ’s failure to pump oxygen-rich blood through the body – is normally considered an older person’s disease. However, African-Americans aged 30-40 suffer heart failure at the same rate as White people who are 20 years older.

When it comes to specific risk factors, the news doesn’t improve:

You can’t control your age, your gender or your family and ethnic history, but here are tips on controlling 4 risk factors.

Atrial Fibrillation (Afib) or irregular heart has been a known risk for stroke. Recent research shows Afib is also a risk for heart attack — with African-Americans experiencing twice the risk.

FINAL THOUGHT: African-American men and women suffer heart disease 20 times more often than Caucasians. Even with all this danger lurking, there is a delay in recognizing symptoms among African-Americans. Studies show that people from this ethic group are diagnosed later than Caucasians and have more risk factors when they are finally diagnosed.

If you have any of these problems or symptoms of heart valve problems, see a cardiologist for tests and treatment options.