Heart Disease Can Be Triggered by Untreated Sleep Apnea 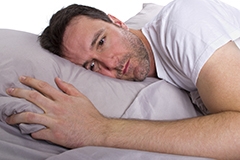 One in five adults suffers from some form of sleep apnea, a condition in which an individual repeatedly stops breathing throughout the night. In a report by Harvard Medical School, researchers estimate that untreated sleep apnea may raise the risk of dying from heart disease by up to five times.

“According to that same report, sleep apnea is found in 47%-83% of individuals with cardiovascular disease, 35% of individuals with high blood pressure, and up to 53% of individuals with heart failure, atrial fibrillation and stroke,” says McLeod Sleep Clinic Medical Director Marwan Elya, MD. “Obstructive Sleep Apnea (OSA), the most common form of sleep apnea, is characterized by repeated collapse of the pharyngeal (neck and throat) airway during sleep, resulting in reduced or complete cessation of airflow despite ongoing breathing efforts.”

WHO IS AT RISK
OSA affects 20% of males and 10-15% percent of females. The risk factors for OSA include obesity, male gender, aging, daytime sleepiness, systemic high blood pressure and menopause, as well as African-American, Chinese and Indian ancestry. Non-obese individuals are still at risk for OSA, accounting for 30% of patients who have the disorder.

While snoring is common with obstructive sleep apnea, not all people who snore have the disorder.

SYMPTOMS
Most patients with OSA come to the attention of their physician because they are complaining of daytime sleepiness, or the bed partner reports loud snoring, gasping, snorting, or interruptions in breathing while sleeping.

Other associated symptoms of OSA are irritability, awakening with dry mouth, awakening with a sensation of gasping, lack of concentration, morning headaches, impotence, frequent urination at night and depression.

DIAGNOSIS
A formal medical sleep study (Polysomnography) is the gold standard diagnostic test, which is performed overnight in a sleep laboratory with a technologist in attendance.

During the sleep study the patient is connected to a variety of monitoring devices. The sleeping room is equipped with a camera and audio system. The heart rate, oxygen saturation, presence of snoring and airflow are monitored, among other parameters.

In some patients, the diagnostic evaluation may be performed at home without a technician in attendance.

TREATMENT
The most common and effective treatment for OSA is continuous positive airway pressure (C-PAP), which provides constant air pressure through a face mask to keep the individual’s airway open.

Although C-PAP is the standard treatment for OSA, the sleep specialist can sometimes advise other alternatives, such as oral appliances and surgery. Also, in obese patients, weight reduction and exercise are advised.

ACTION YOU CAN TAKE
If you’re feeling the symptoms, see your family physician, who may schedule you for a sleep study.